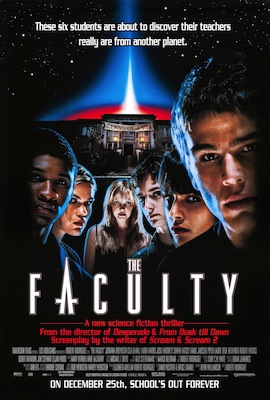 Think of The Faculty as an adaptation of sorts. A movie where aliens somehow take over the humans’ bodies, one by one, until all of them are infected. The film recognizes that the premise is a lot like Invasion of the Body Snatchers or The Puppet Masters, but this particular rendition is both scary and cool. And perfectly captures the spirit of teen America in 1998.

Teachers at an Ohio high school start acting weirder than normal. And a hodgepodge Breakfast Club-like group of kids discover that their behavior might be due to some weird alien parasite. They work together to solve the mystery, where they figure out they must hunt down the alien queen and kill it so the school will go back to normal.

The Faculty goes deeper than just a basic invasion. There’s an obvious motive for the aliens, and the psyches of the students are discovered as well. It’s not the first late-90s film to be obsessed with the self-destruction of teen America, but this time that theme coincides with an alien invasion.

For the most part the characters walk the fine line of realistic and what we’ve been convinced is realistic by movies and TV. But there’s one scene with Elijah Wood’s character, Casey, where his parents act so unbelievably unrealistic that, for a second, it takes you out of the movie. But only because its own standards for realism within the film universe have already been established by this point.

The twist at the end may be a little predictable for anyone paying attention, but along the way the story gives you a couple smaller twists that you really don’t see coming.

The Faculty is a really fun and exciting experience that you can rewatch over and over again. The cast is charismatic and the pace never slows down for you to over-think things too much. For a movie that has something to say about the teen psyche, it just as easily knows how to grab their attention and distract them for a little while. And us, too, in the process.