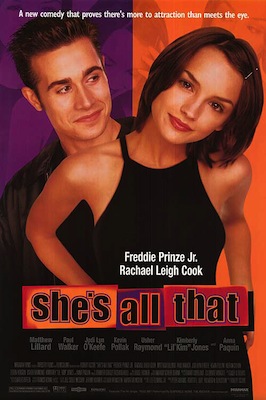 These types of story lines are always so painful from the very beginning. The whole movie, you can’t get it out of your head that everything’s going to end up very bad for everyone. The protagonist is always afraid to do the right thing. Even though failure to blurt out 2 sentences could fix everything.

Freddie Prinze Jr. plays Zack, the most popular kid at his high school, whose equally-popular girlfriend just breaks up with him. They were a sure-fire bet to win prom king and queen. With prom coming up, Zack makes a bet with his friends that he can turn any girl into a prom queen. Even the nerdy and unpopular Laney Boggs (Rachael Leigh Cook).

Upon looking at Cook, it seems like she’s just a good-looking girl who will, undoubtedly and easily, turn into a swan as soon as you take her glasses off. And she does. But upon seeing her personality, she really does know how to act quirky and uncool.

The filmmakers do a great job with Laney, for the most part. She stays away from the damsel in distress archetype for almost the whole movie. She falls into it once, and it’s disappointing. Cook does well playing Laney as a one dimensional character, but when she gets the chance to show off her acting chops, she fumbles hard.

Her character does go through the obligatory transformation to become popular, but Laney never lets this change her as a person. She looks different, but never acts different. And she never lets the popularity go to her head. Unlike, say, characters in the movie Grease.

But the ugly duckling trope isn’t what makes this movie likable. You can’t help but feel like She’s All That is more than just the corny teen movie it should be–with the help of solid comedic sensibilities and great out-of-the-box characters to show them off. Standouts are faded, yet self-absorbed reality TV star, Brock Hudson (Matthew Lillard), and Laney’s eccentric father and brother played by Kevin Pollack and Kieran Culkin, respectively.

The film still does things like dedicating an entire scene for exposition, and trying to cram a bunch of depth into 3 minutes. But the actors go all out. They’re truly convinced of the truth behind their characters, and it shows.

This story has been done a bunch of times, and it would’ve been nice if this version deviated from the expected, even though I never thought for a second it was going to.

She’s All That is definitely a guilty pleasure film. Which means, in this case, that we like it despite how cliche and predictable it is. Maybe because it’s organically cool. Or deceptively hilarious. Or maybe because we can tell that the actual end product is exactly what the filmmakers had in mind–which is probably the most impressive thing of all.