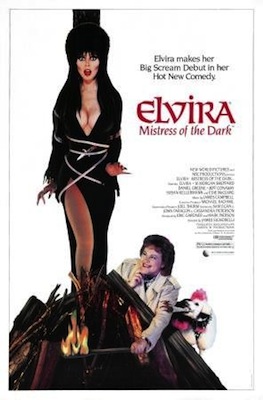 Usually “spooky” comedies come in the form of PG family entertainment. But Elvira: Mistress of the Dark was released in 1988, when these types of films weren’t prevalent yet, so their identity wasn’t established. That same year Tim Burton’s Beetlejuice, which helped usher in the spooky family films popular in the ’90s, took the ideas of classic horror and made them more fun, less scary, and arguably more bizarre. While not really scary, Elvira takes that rough model and fills itself with subtle sex jokes, slapping a PG-13 rating on it.

Host of a cheesy horror TV show, Elvira (Cassandra Peterson) travels to a small town in Massachusetts to retrieve the rundown mansion her dead aunt left her in her inheritance. The holy-roller townspeople want her burned at the stake because of her voluptuousness and free spirit. But she’s just trying to sell the house in order to make money to front her new show in Las Vegas.

We get a thin premise to say the least, but surprisingly the movie does a lot with it, never really lagging much.

At first it’s hard to believe that we won’t eventually get tired of Elvira’s schtick, but her personality develops so well throughout the story that we end up rooting for her. Peterson commands our attention excellently and is likable enough to make the film entertaining.

The humor borders on slapstick on occasion. Often times the jokes come at inappropriate moments, giving us an Airplane! feel, but without Airplane!’s cohesive goal. Because, simultaneously, the filmmakers want us to be more invested in the story and its characters than the usual farce, so we tend to be conflicted. For instance, in one scene the bad guy is chasing Elvira trying to kill her and she’s still cracking jokes to the audience. This is a suspenseful moment undermined by something out-of-place. Bizarre.

Mistress of the dark is very much in the same vein as Pee Wee’s Big Adventure–another Tim Burton film–except that it’s missing Burton’s auteuristic vision and is somehow more fast-paced.

The film is definitely a snapshot of the late-’80s, but in the best way possible. These types of movies get better with age because they reflect an era in pop culture that many of us are fond of. Whether it’s because we lived through it, or we just admire the simplicity.

Most of Elvira: Mistress of the Dark makes sense, even if it has no business doing so and never needs to. The film could have existed merely as a vehicle for Elvira fans. But it becomes much more than that–an amalgamation of different, yet kindred styles–benefiting from being released prior to any formulas of the eventual sub-genre becoming set in our minds. In turn we get a fun and entertaining Halloween movie that’s one-of-a kind.