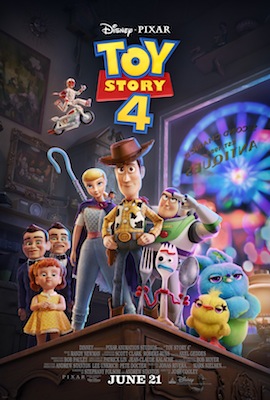 Toy Story 3 is, for all intents and purposes, perfect. A flawless blend of comedy and poignancy. A nail-biting adventure filled with iconic scene after iconic scene, driving an airtight narrative which develops characters to a brink never thought possible in a children’s movie, let alone an animated children’s movie. I just don’t think I could ever see anything wrong with that film.

Toy Story 4, well, is a really good movie. It gives us brand new surprises and takes us on another fun journey as Woody tries to save the day again. The film also utilizes our familiarity with the characters to the point where it doesn’t feel the need to develop them much at all. In fact, the only character who goes through any sort of internal journey is Woody, and it’s more lackluster than we’ve come to expect from this series. A struggle that doesn’t need this entire movie to uncover. At least, not in the way this movie attempts to uncover it.

The film opens with a flashback, shortly after the events of the second film, as Woody (Tom Hanks) gets word that his de facto girlfriend, Bo Peep (Annie Potts), is put inside a cardboard box to be given away to another owner. Woody, taking a second to consider getting in that box too, realizes that his owner, Andy, needs him more and decides to say goodbye to Bo Peep.

In present day, Woody’s new child, Bonnie (Madeleine McGraw), who now has the rest of Andy’s former toys, is starting Kindergarten. Bonnie’s having a really hard time with the adjustment, so Woody decides to stowaway in her backpack. During arts and crafts time in the classroom, he covertly pushes her to create her own toy out of a spork, googlie eyes, pipe cleaner, and popsicle sticks all found in the trashcan. She names this new toy “Forky” and instantly finds comfort in him.

Forky (Tony Hale) comes to life, but isn’t the sharpest tool in the shed. Much like Buzz Lightyear (Tim Allen) in the first film, Forky believes his destiny to belong to the role he started with–in his case, the trash. After Bonnie takes him home, Forky keeps running to the trashcan while Woody has to dig him out. This goes on for about 5 minutes.

Bonnie and her parents eventually go on an RV trip, where Bonnie brings all of her toys. Forky, still unsure what it means to be a toy, launches himself out the window in order to escape Woody’s persistence that he’s not a piece of trash. Being the hero that he is, Woody goes after him. After finding Forky, Woody has a deep talk with him, explaining to him the meaning of being a child’s toy and the responsibility that comes with that. It’s a good moment, but just takes too long to get to.

I swear, the toys in this movie are a lot braver with coming to life when humans are present.

Eventually the two of them wind up in an antique shop after Woody spots evidence of Bo Peep inside. While looking for her, the two toys meet the creepy Gabby Gabby (Christina Hendricks), a pull string doll with a broken voice box, who tricks them into thinking she’s taking them to Bo Peep, who’s ends up not being there, when she really just wants to possess Woody’s voice box. Gabby is truly scary, and has an army of ventriloquist dummies who do her bidding. Woody escapes, but Gabby Gabby holds Forky hostage knowing that it will bring Woody back. She’s right. Woody devises a plan, which becomes all the more feasible once he finally runs into Bo Peep, now a celebrated “lost toy” who escaped the confines of the antique shop to live on her own in the wild. The Bo Peep character in this film is different than we last left her, but due to the circumstances, her change is justified.

Toy Story 4 tries to replicate the premise from the first Toy Story in a way, with Woody’s motives catalyzed by the loyalty to his child. But that movie had Woody rescuing Buzz and trying to find their way home. The two of them were at odds with each other, forced to overcome their differences to understand one another.

This time around, the two lost toys (Woody and Forky) are hardly together at all. Woody’s rescue mission is about Bonnie, but his relationship with Forky hardly feels developed, or important at all with not nearly enough growth.

This story is supposed to be a celebration of Woody and Buzz’s friendship, but the only problem is the two characters share so little screen time with one another. Woody is the main focus. Buzz is there, albeit slightly dumbed down, but of no more importance than the other ancillary characters–other than the Little Green Men (the squeaky toy aliens) who frustratingly don’t have any speaking parts.

The film has a thin premise, but focuses a lot of time on the new characters, developing Woody’s inner conflict just enough to navigate to a desired, and slightly telegraphed, end result.

Driving this movie are two things: Forky, whose Frankensteined existence is uncalled for, yet wonderfully real, and Woody’s belief that Forky’s purpose in this world is justified despite him being a literal piece of trash. There’s more nuance to this, which is never quite tapped into, only implied. In a cinematic universe led by the notion that toys are people too, Woody discovers that there are no boundaries for what makes something a toy, either.

There aren’t nearly as many iconic moments in Toy Story 4 as its predecessors. Likely because this movie tries to recreate much of what worked in the previous films rather than be its own thing. Playing off the genuine hilarity of Toy Story 3, from start to finish this movie is perhaps more funny, but also loses the well-earned wistfulness that movie executes so well. The comedy in Toy Story 4 is at about 80%. Probably 20% more than Toy Story 3. At times the jokes aren’t just plot devices, but there merely for laughs. Last time around the comedy always organically fit into the situations in the story.

Toy Story 4 may not be as cleanly paced as the narratives of the other films in the series, but doesn’t lack their sentiment. It just lacks their smooth journey getting there, as well as the reverence to not try to make a joke at every possible opportunity.