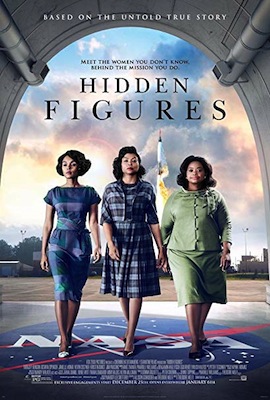 For anyone who’s been in a critic’s seat since early 2016, we expected a number of racially-charged films to get nominated come 2017 awards season. Movies coming out were already in production by the time the “Oscars So White” controversy started the year prior, but we felt they might have an advantage anyway. So naturally, hearing of a film that’s not only about race, but gender during the Civil Rights Movement, we weren’t holding our breath for greatness.

But Hidden Figures surprised me with how much I loved it. Telling a new story with old themes, we know what’s going to happen, most likely. But unlike racially-themed Oscar movies of the past, like The Blind Side or Crash nominated (and winning at times) out of obligation, Hidden Figures is actually well-done. It doesn’t come off as preachy or formulaic. And even better, it doesn’t try to manipulate us to tears.

The film closely follows three black women who worked as NASA mathematicians during the space race of the early 1960s. Taking place in Northern Virginia during the civil rights movement, the women have to overcome others’ pre-conceived notions of their brilliant abilities.

The woman at the center of the story is Katherine Johnson, played by Taraji P. Henson, who eventually works her way up to be included in classified Pentagon meetings with John Glenn. Meetings which no woman was allowed to be a part of, regardless of skin color.

Henson’s performance is absolutely flawless. She transitions seamlessly between her reservedness in the workplace to her stubbornness with her soon-to-be husband, without ever questioning how neither one fit with her character–until they ultimately blend together by the end of the film.

Another woman, Mary Jackson (Janelle Monae), worked first hand as an engineer on actual space pods themselves. And Dorothy Vaughan (Octavia Spencer) was the supervisor of a team of women in charge of the very first IBM machine used by NASA.

The three women represent a number of even-more-hidden figures that helped NASA and the US achieve all they did back then.

All around, the performances are spectacular. It’s one of the best-acted movies of 2016 (even Jim Parsons is surprisingly great as Katherine’s dismissive coworker). And that’s what helps separate this film from all of its critically-acclaimed predecessors. It goes beyond story and looks at how it’s delivered.

Hidden Figures is brazen without presenting events in a way that they probably weren’t dealt with. It doesn’t necessarily create more friction than needed.

However, the script isn’t perfect and makes some questionable choices from time to time. Aside from not really giving us anything new, it often sacrifices pragmatism for transparency, becoming cliche just to get a point across, where more realistic dialogue could have been used instead with the same effect.

At one point, Monae’s character says something along the lines of, “It’s 1961 and black women are chasing down a police car.” Maybe it’s nitpicky, but I’m not sure if they had that sort of pre-hindsight or retrospective awareness back then. But I suppose the anachronisms are fitting considering the contemporary Pharrell songs scattered intermittently throughout the film.

But that one quibble doesn’t accurately represent my opinion of the film as a whole. It’s not pristine, but it’s very good. Great, even. My prejudice of Hidden Figures is proven wrong. The film doesn’t just get a convenient release a year after the Oscars So White controversy. I don’t want people, like myself, thinking that all of this movie’s acclaim is merely propagated. It’s unfortunate that the credibility of a great film will be affected by a racial-charged controversy that would have had no bearing on its success anyway. Hidden Figures would have likely been nominated for Best Picture any given year. Heck, if The Blind Side got nominated…