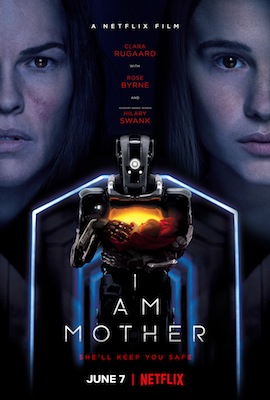 We’ve all seen post-apocalyptic movies in one way or another, so we know there are only so many ways humanity could be wiped out as a whole. I Am Mother knows this as well, and doesn’t focus too much on the “why”. Because that’s not what’s important. We must realize the bigger picture here, which is looking forward to how humanity can survive again without making the same mistakes we did the first time around. How our character and decision-making can be fixed. But what’s character and decision-making without ethical foundation? Luckily this film gets my point.

There’s an extinction event on Earth and civilization is attempting to repopulate with the help of a robot and 63,000 human embryos inside of a secure bunker in a remote location. The robot, named Mother (voiced by Rose Byrne), grows one of the embryos inside of an incubation chamber. The girl, named Daughter (Clara Rugaard), is raised by Mother all throughout her life not knowing any other humans. How could she? There aren’t any left. And the world outside the bunker walls is too toxic for humans to survive. So repopulation must begin inside this laboratory-looking facility.

Daughter asks Mother why she doesn’t have any siblings. Mother explains that she wanted to perfect being a mother with one child before she started taking on more. This all makes perfect sense to Daughter, until, as most of us do as teens, she develops an independent voice and rebels a little. Arguing with certain philosophical concepts she’s taught in her classes. Mother is raising her to think just like her–robotically. Ultra-logically with no human response. No set of morals. Beliefs, but not morals. Daughter’s human side comes out, so she speaks up.

Sometimes when we question the ideals our parents have raised us on, we come away having a stronger and more firm belief in those ideals than we did before. Other times we come to the conclusion they were wrong. And if they’re wrong about one thing, what else could they be wrong about?

Daughter starts to realize just that. She starts questioning everything else she was ever taught. What’s really outside the walls of her bunker? And are there really no other humans? As it turns out, there are. At least one other. One night, as Daughter plans on sneaking outside to see the forbidden world for herself, she discovers a woman (Hilary Swank) who’s injured and needs her help. But this woman is terrified of Mother. She claims that robots just like her are the cause of all the destruction outside.

Daughter knows that can’t be true with Mother. She knows Mother. And because she’s now able to start independently seeing what’s morally right from wrong, she can better attest to her mother’s character. Nevertheless, the woman’s presence causes a rift in that relationship that may never be mended.

Directed by Grant Sputore, I Am Mother could have easily been another depressing dystopian allegory kept high on concepts, yet low on actual entertainment. Despite having a minimal human cast, Rugaard brings so much to the performance of Daughter, sustaining the conviction of a veteran actor for nearly 2 hours. As she’s the only human on screen for about 80% of this movie, it could have been easy for her to have simply locked into just one note. Instead, we get to watch her unveil her range slowly as this film progresses.

Other than ethical decision-making, Daughter possesses those certain intangible qualities that make her human. However, she has some learning to do since she was raised by a robot after all. Not knowing who to trust, she’s forcibly torn between two sides. Having allegiance to her mother because she’s the one who raised her, but also a responsibility to the human because she’s of her kind. Even though they just met, you can tell it’s easier for her to empathize with the human because she’s one too. And taking it one step further, you can subtly tell she knows this to be the case (credit again to Rugaard). But Daughter realizes that just because one does something bad at one point in their life doesn’t mean they can’t be good. Or more importantly, that they can’t be loved.

I Am Mother is unbelievably deep, touching upon profound moral concepts such as playing God, along with the morality of the ends justifying the means. Presenting heavy themes is one thing, but doing so at a level where everything can still be so cohesive is downright impressive. There’s a lot going on subtextually, yet nothing gets in the way or becomes claustrophobic.

Many times high-concept movies like this try stubbornly hard to stay within the confines of their setting. But I Am Mother evolves and adapts to its own kinetic story, taking us on a journey with no wasted moments, and following through on all it sets out to do.

I Am Mother constantly pulls pieces from both robot and human–logic and emotion–and blurs the line between them. And since a blurred line is indicative of emotion, by nature, we might be able to crack the code of what stance the filmmakers are leaning towards. Though if they’ve taught us anything, it’s that we definitely need both.

Originally published on July 1, 2019 at https://www.popzara.com/movies/vod-reviews/i-am-mother-2019/