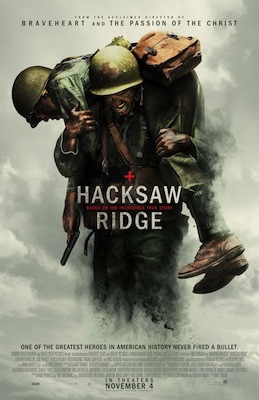 When watching a war movie–especially one this brutally realistic–it’s easy to become numb with all the killings and lives lost. But Hacksaw Ridge makes you feel the hurt and the emotion, even amidst the chaos.

Containing perhaps some of the most haunting war scenes I’ve ever seen in film, I imagine it would be similar to if Saving Private Ryan had been made 18 years later. They both strive for the same goal as far as the rawness and realism.

Hacksaw Ridge follows Desmond Doss (Andrew Garfield), a World War II Army Medic who refuses to carry any firearms. He faces ridicule and potential dishonorable discharge unless he goes against his convictions and picks up a weapon. Yet, he still refuses. He’s called a coward and, at one point, is beaten up by some of his fellow soldiers.

The film tells his whole story, but connects it all fluidly. From his time as a child with his brother and abusive father, to meeting his wife, to facing adversity in basic training, to his actual time spent in the Battle of Okinawa in Japan.

We’re given a full account of Doss as a person and why he has such strong faith–even if he doesn’t always fully understand it at times. He knows that’s what the trials of faith may entail. His promise with God not to touch a gun ever again keeps him honest. His stubbornness is commendable. Even admirable. Sticking with your convictions is easy when you don’t catch flack for it, but nearly impossible when treated how he is treated.

The performances don’t necessarily require much from the actors, since much of the film takes place on the battlefield and there aren’t a whole lot of demanding scenes the way a typical character study may have. Yet the actors still give it their all.

A film with this theme must be careful not to have onlookers write it off as polemic, so a superb set is all but required. And director Mel Gibson and his crew deliver–not once making you question what era this movie takes place in. A lesser film would have easily succeeded in taking you out of the believability of it all.

Based on the actual Desmond Doss, his peers and superiors look at him as a coward, but it’s perhaps even more brave for him to be on the front lines without any means to protect himself. Hacksaw Ridge is my favorite movie of 2016, and one of the best I’ve seen in quite awhile.