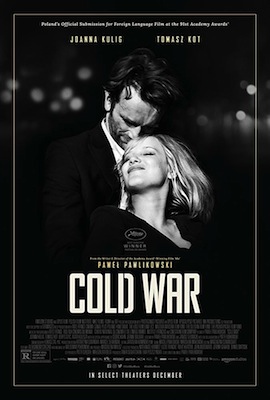 If you’ve ever wanted to watch movie about broken love set amidst the backdrop of the geopolitical tension in 1950s Europe, look no further than Pawel Pawlikowski’s Cold War.

Boring and self-indulgent, Cold War stars Tomasz Kot as Wiktor, a music conductor who is holding open auditions in 1949. One of the talents is a young woman named Zula (Joanna Kulig), who isn’t quite amazing, yet Wiktor recognizes that she has that “it” factor that transcends talent. Also, he might just be lusting for her. Whatever the case may be, the two of them continue an on again/off again relationship that lasts about twenty years.

The romance between Wiktor and Zula isn’t so much unbelievable as it is unrewarding. The two have a chemistry, but their dynamic isn’t much more than either making eyes at one another or passion-driven anger. They proclaim they are each other’s soul mates, but that’s the extent. Never do we feel as though we need them to be together.

The political subtext may as well be implied, as we hardly get any explanation. I suppose if you are Polish, this might mean more to you. But as an American, it’s difficult to become invested in what’s happening in the background.

Like a more confusing and sludgy La La Land (along with other things), Cold War does offer some fantastic musical pieces. The director truly understands sound and the contexts of it. But considering the unique take on the premise, the story is not nearly as entertaining as it could be when no music is happening.

In addition to the score, the film hits all the marks in the technical categories. Pawlikowski teams up again with cinematographer Lukasz Zal to give us some truly beautiful camerawork, utilizing light perfectly in his black and white shots. And despite a boring narrative, the dialogue flows seamlessly with Pawlikowski maximizing each line’s potential and each actor’s performance.

Usually “self-indulgent” and “90 minute runtime” don’t go hand-in-hand, but in this case they do. For cinephiles, it feels good watching an artsy flick every once in awhile. We keep watching Cold War hoping that we’ll come away from it feeling more snobby than we already do. But instead, we end up shaking our heads wondering why, of all the stories in the world, this is the one that Pawlikowski and his team chose to tell. Technical accomplishments aside, Cold War simply doesn’t hit the spot.