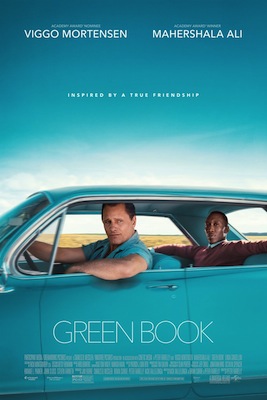 On paper, you can tell exactly where Green Book is going. It’s essentially a story of a white man who drives around a black man in 1962’s deep south. Prior to getting the gig, the white man, Tony (Viggo Mortensen), has his prejudices about black people. Can you guess what’s going to happen next?

But the best part is, it doesn’t necessarily matter what’s going to happen. That’s just the cherry on top. What makes Green Book so special is how well it tells the story. Hilarious, thoughtful, ironic, and poignant, even to a fault, the film delivers scene after scene of necessary events, each one being as memorable and important as the one before, moving elegantly all the while captivating the audience, who is having as much fun as they ever thought they would be watching a movie like this.

Based on true events where a white New York City bouncer, Tony, has to find a temporary job to fill in the gaps while the night club he works at is closed for repairs. He’s contacted by Dr. Don Shirley (Mahershala Ali), a black pianist who needs a driver for his 8 week tour through the deep south.

While Tony is an uneducated simpleton who can’t read and write too well, Dr. Shirley is a worldly and extremely well-read individual with two doctorate degrees. Tony is uncultured, but by far the more likable of the two initially. The filmmakers actually make us have reservations about Dr. Shirley at first. He’s arrogant and pompous, and somewhat mean to Tony. While Tony has his own personal prejudices, upon meeting Dr. Shirley, he doesn’t act upon them like you would expect.

Despite the seemingly heavy topic, the movie is closer to being a comedy than a drama, directed by Peter Farrelly, one half of the brotherly duo who wrote and directed 1994’s Dumb and Dumber, along with some poorly received comedies. While his credits are shaky, this is definitely his most critically acclaimed offering. And his comedic background shows through in the best way possible.

Tony and Don’s dichotomy is the best thing I’ve seen on film in a long time. Both Mortensen and Ali give ridiculously believable performances becoming chameleons in their respective roles. You can tell they’re having as much fun playing the parts as we are watching them.

On the surface, Green Book is a story about two opposite people, but deep down it also acts as a character study on Dr. Shirley and his struggle to find where he fits in. He’s a black man, but due to his “proper” appearance, he isn’t accepted by other black people. And because of his skin color, he faces discrimination and racism from white people.

Dr. Shirley is touring the deep south with his music by his own choice. The film tells us he’s doing so to help change people’s minds and hearts–which is definitely a large part of it–but another part of him wants to face that egregious racism of the deep south, just like the other people with his skin color, in his constant struggle to find who he can relate to.

Green Book has intense scenes and presents us with a serious subject matter, but is wildly entertaining and a lot of fun in between all of that. It plays things a little safe, but you almost hope it does, getting the point across without having to resort to bigger and more brutal examples that we’ve already seen on film a hundred times.

Even though the script can be too on-the-nose at certain points, it’s really smart and always knows what it’s doing. We’re not just made to empathize with Dr. Shirley, but also to come to understand Tony as well, through Dr. Shirley’s own realizations. This film doesn’t point the finger, but shows how everyone has the potential for personal growth and understanding, no matter who they are. And in this case, both sides of the coin get that treatment.