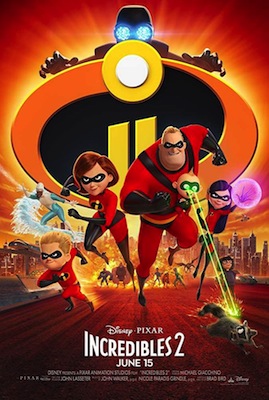 We’re so used to living in a world where we get a superhero sequel each year. So it’s interesting that it’s taken nearly 15 years for Pixar to release Incredibles 2.

This one picks up right where the last one left off. The Incredibles–a family of superheroes with natural-born powers–are battling a villain, the Underminer, who is terrorizing their hometown Municiberg. The collateral damage involved in trying to stop the villain has infuriated the government, prompting them to shut down the Superhero Relocation Program, which declared that as long as all superheroes live permanently as their secret identities and don’t use their powers in public, that they will receive financial assistance.

Mr. Incredible (Craig T. Nelson) and his wife Elastigirl (Holly Hunter) are approached with an offer from wealthy businessman, Winston Deaver (Bob Odenkirk), to perform heroic acts with a body camera on, so that the footage can be publicized in order to regain trust from the public and the government. Deaver’s father was a superhero enthusiast who was friends with several heroes. But he was murdered immediately following the enactment of the Superhero Relocation Program, so he wasn’t able to call any of his friends for help. Deaver sees superheroes as highly important to keeping the piece, and getting them reinstated would be a way to avenge his father’s death. (The mystery surrounding his father’s murder never gets wrapped up, which is one of the only missteps of this film.)

Incredibles 2 does a great job of replicating the feel of the first movie, while also improving upon almost every aspect–mainly because the standards of superhero movies have increased in the meantime. This one is funnier, has a better story, and immerses us more into the superhero world–which we were merely teased with last time around.

The sequel deals with the same issues as the first with superheroes being “illegal”, but elaborates on that premise, putting it on a grander scale. Where the first one deals with this issue on a personal level (the entire film basically took place on a remote island where Mr. Incredible was dealing with being captured by a super villain), this one lets us see how the ban affects the rest of the world.

After years of waiting, the filmmakers could’ve wasted time with cutesy in-jokes and references to the last movie, but this film is able to stand all on its own as though the last one never existed. We also don’t get any fabricated sentiment or emotion like several other Pixar movies of late.

The Incredibles series just possesses a different feel from other Pixar films. With animated humans, it’s crucial to have realistic dialogue, which poses an obstacle since it’s basically a movie aimed at kids, but about adults–where most other animated movies that feature humans are about humans of the same age as the target audience.

The twist may be a bit predictable, but the journey leading up to it isn’t. Incredibles 2 does far and above what the last film accomplished. The first Incredibles was a good superhero movie during a time where we weren’t so familiar with them, but it doesn’t hold up as well now. Whereas Incredibles 2 can stand up against most other superhero fairs in an era of superhero movies.