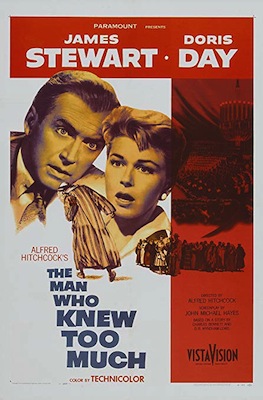 One of Hitchcock’s more underrated films, 1956’s The Man Who Knew Too Much, is a quasi-remake of his earlier 1934 movie of the same name.

This time around, the story follows American tourists, Ben and Jo McKenna (James Stewart and Doris Day), along with their son, Hank (Christopher Olsen), as they vacation in Morocco and befriend a man named Louis Bernard (Daniel Gélin) who seems to be asking them a lot of personal questions without divulging any information about himself. Jo immediately becomes wary of Louis’ odd behavior and knows something is up.

Without giving too much away, Ben and Jo eventually find out information about an assassination plot, and their son is held hostage as insurance that the couple remains silent on all that they know.

Even early on, as the plot isn’t nearly as fluid as later in the movie, Hitchcock builds suspense well and has us enjoying our own speculation as we feel like we don’t know who to trust.

But where the director falters is in his ability to harness any briskness in his story. Some of the character decisions tend to veer from believability. Once Stewart finds out their child has been abducted, he casually and calmly plans his next step–even waiting hours until he heads to London where he suspects the boy has been taken. It’s like he doesn’t believe the kidnappers’ threats. This type of thing happens two or three times throughout the second act, almost as though Hitchcock, himself, doesn’t believe their threats either.

With that said, Day’s performance as a mother whose child has gone missing is right on the money. She exudes every ounce of terror and worry that one would feel in that very situation. It’s palpable and has us stone silent as we watch her break down. Her emotional journey over the course of the film is one of the highlights.

Still, Hitchcock doesn’t quite reach Psycho territory here. The narrative isn’t as lean and there’s just an overall lack of urgency. At 2 hours, the director could have easily trimmed the fat here and there. But the story is perhaps just as gripping as the aforementioned, since the stakes are higher. Losing a child is every parent’s worst nightmare, and Hitchcock taps into the emotional weight that carries.

Despite its only real nagging issue, The Man Who Knew Too Much is a lot of fun and makes up for its occasional character misstep with a consistently suspenseful thriller filled with enough twists and turns along the way to make our mouths water.