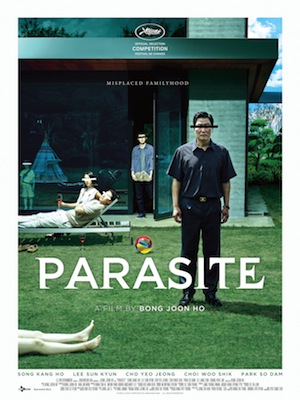 After graduating college, I was surprised to learn that a lot of my friends resorted to lying on their resumes when trying to get jobs. Finding employment is never easy, especially when you’re fresh out of school (despite what they tell you) and have little “real world” experience to set you apart from others. Now imagine how difficult it could be when you don’t have that precious degree, and your personal network isn’t connecting like it should. That’s the situation the Kim family faces in Bong Joon-ho’s Parasite, unanimous winner of the Palm d’Or at this year’s Cannes Film Festival and a frightening look at just how far some will go in order to navigate the byzantine labyrinth of class culture in this modern society.

The Kims live in a dilapidated below-ground apartment and struggle to get by. When it rains, the sewer backs up and floods their living spaces. The neighbor, whose free Wi-Fi they sponge off, has just changed the password, so they can’t even use the app that’s been helping them find work. The family desperately takes any odd job they can find, a situation made more dire as they were recently fired from their pizza box folding endeavor. Friend of the family, Min (Park Seo-joon), suggests to Ki-woo (Choi Woo-shik), the older of the two children, that he should pose as a university student and take over his job as an English tutor for the very wealthy Park family’s daughter, Da-hye (Jung Ji-so).

Ki-woo follows through and has his sister, Ki-jeong (Park So-dam), forge the official documents he needs. Once he gets the job, he discovers the Park’s younger child, Da-song (Jung Hyun-joon), is a gifted artist, but has had trouble keeping an art teacher. Ki-woo tells them of a professional he knows, by the name of Jessica, who is actually his sister, Ki-jeong.

From there, the Kims slowly infiltrate themselves into the Park’s lives. Soon their father Ki-taek (Song Kang-ho) becomes the Park’s chauffeur and their mother Chung-sook (Jang Hye-jin) becomes their housekeeper. The Kims go to extremes to accomplish their con, including getting previous employees fired for things they didn’t do. Even though you think it would be obvious, the Parks obliviousness prevents them from ever noticing that the four “parasites” are related to one another.

About an hour into the film, after each member of the Kim family has been successfully planted into the Parks’ home, we’re curious where else this story has left to go. Luckily Bong never relies solely on his straightforward premise to carry his film. He evolves his plot in ways you could never imagine, taking us down a fascinating rabbit hole. Parasite subverts our traditional ideas about protagonists and antagonists, giving the two families a little bit of each while juxtaposing two opposing social classes in modern South Korea.

Despite the Parks’ feelings of superiority, they never actually do anything wrong. So not only are the Kims’ actions unjustified on that front, but we also wonder why the Kims should deserve all these perks over, say, another family who’s struggling just the same. Alternately, what would happen if every family in the Kims’ position did exactly what they did? If everyone lies on their resumes, what does that do for the people who actually worked hard to earn their credentials and told the truth? (I’m not bitter or anything.)

Bong, who also co-writes, shows the faults of rich while making us feel sorry for them. He does the same to the poor family while never trying to justify their actions. The points made are never on-the-nose, yet we still empathize with both sides–especially the Kims. Even when the actions are morally wrong, it’s literally heartbreaking what many people–especially families–feel like they have to resort to in order to survive.

At one point, Mr. Kim tells his son that the only plan that never fails is no plan at all. He’s both right and wrong. Life throws a million curveballs at you, which can make you a very miserable person if you choose not to accept them simply because they go against your ultimate “plan”. However, if you’re able to pivot and readjust along the way, viewing them as opportunities rather than obstacles, then you might just manage to live a happy life, regardless of how much (or little) money you have.

Parasite is a dark comedy, but also a very poignant and frank depiction of the realities of our capitalist society. Certain sequences may come off as a bit unrealistic, perhaps due to specific acting choices, but they’re fitting in Bong’s masterful allegory on class warfare. The best points are often those that don’t need to be explicitly stated.

The lesson here? Don’t lie on your resumes.

Originally published on November 8, 2019 at https://www.popzara.com/movies/movie-reviews/parasite-2019/