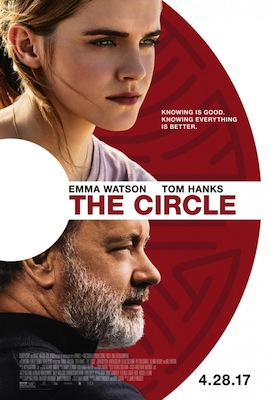 These days, there’s always a debate on privacy versus transparency. Although it’s safe to say most people don’t like their own privacy invaded. The Circle almost exclusively tackles those issues. The only problem is it never makes up its mind.

The story follows a young woman, Mae (Emma Watson), who gets a job at a tech company called The Circle. The Circle is basically a giant social network that keeps everyone in the world connected and acts as a non-government Big Brother. Unrealistically, it’s used by every single human being, and even tries to broaden its exposure by implementing a government mandate requiring you to use it.

Upon becoming employed by the company, Mae is caught off guard with the cult-like demeanor of everyone around her. The HR reps become overly-concerned that something is wrong after she leaves work Friday afternoon and they don’t see her again until Monday morning.

Eventually Mae voluntarily becomes the world’s first “fully-transparent” subject–basically Truman Show-ing herself and letting the whole world peer into her life at every second. Her family and friends hate it, but she sees nothing wrong with it.

As blatant as this movie seems to be, it never actually states that privacy is a good thing. Director/co-writer James Ponsoldt actually says a lot without saying anything at all–nullifying many of the intended social commentary and giving the appearance that perhaps he can’t handle the overly-ambitious themes.

The best thrillers immerse their audiences into the plight of the protagonist. But at no point do you feel like you’re really in Mae’s head. There’s a detachment. Mostly due to the fact that her character traits are very lenient. At first she stands out as a cynic amongst the glazed-eyed crowd, when halfway through the film does a 180 and makes a statement about how she is different because she’s NOT a cynic. Apparently unbeknownst to Ponsoldt, that’s exactly how she’s the SAME as everyone else.

At times the film acts as a satire of the millennial generation and its expectations for life. And while The Circle is in no way a comedy, the oddities are so on-the-nose that they inadvertently come off as humorous. Ponsoldt and company make their points a little too obvious.

On the bright side, it’s fun seeing Tom Hanks as the villain for once. This is one of the only things keeping the film interesting. There’s also this potentially juicy subplot featuring an off-the-grid web developer played by John Boyega, but it proves to be underwhelming and fails to fully come to fruition, never paying off like it should. One of the several loose ends leaving sorely us disappointed.

Despite the blatant messages scattered throughout, The Circle never completely finishes the job it starts by never actually stating whether it thinks privacy is good or bad. Whatever the filmmakers’ opinion, it would be nice to know. And if they’re not going to tell us, at least fulfill other needs along the way.

Amidst Watson’s wavering American accent, all the best acting in The Circle comes from the seasoned vets, including Hanks, Patton Oswalt, and the late Bill Paxton. Another point for the non-millennials.