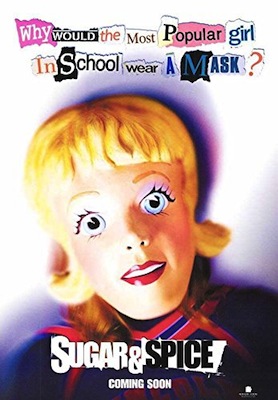 Sometimes a comedy doesn’t have to be hilarious. A lighthearted story is sometimes enough. But the film must be entertaining.

Sugar & Spice is narrated by a 2nd string high school cheerleader, Lisa (Marla Sokoloff), who bitterly despises the girls on the A-squad. Lisa is telling the police her testimony about a crime that’s taken place.

She begins by giving background on the five suspects, all members of the A-string cheerleaders, led by Diane Weston (Marly Shelton), who becomes pregnant with the child of starting quarterback, Jack Bartlett (James Marsden). After the couple gets kicked out of their parents’ homes, they shack up together. Enthusiastic at first, they soon realize how tough it is out in the real world. Money is tight, so Diane schemes a plan to rob a bank after watching Point Break with her girlfriends.

Since the story is being told from the perspective of someone who doesn’t like the story’s subjects, it prevents us from getting much empathy for the characters, so the movie resorts to personality cliches.

Archetypes this strong aren’t usually meant to be a plot device. Usually, they’re in a movie for a laugh or two along the way, or to propel a plot point here and there, but the entire film seems to revolve around them too much. Almost at an obsessive level. From the opening credits, the filmmakers make it abundantly clear that they want us to know each character has an archetype and pounds each one down our throats over and over–exploiting them for humor.

Other than Jack, there aren’t any real likable characters. Though Diane develops decently enough over the course of the story, it’s never to the point of us loving her. Even our narrator, Lisa, isn’t appealing. She’s perhaps the worst in the movie.

Marsden is magnetic playing the clueless yet lovable Jack, proving why he ended up being the biggest star out of the bunch.

Sugar & Spice embraces the superficiality of high school and glorifies it unredeemingly. The way the film is set up gives it no heart, which could be overlooked if it were funnier. But the lack of both comedy and empathy works against one another here. Though somehow the story is engaging and unique enough to give it the kind of entertainment value that’s sometimes found in the most unlikely of movies.