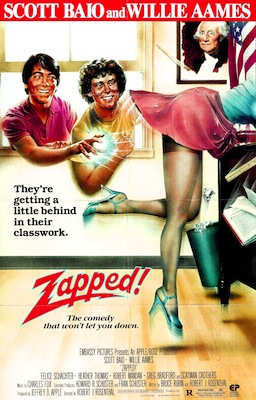 The ’80s had their fair share of ridiculous frat comedies masking senseless and plotless hijinks behind a unique hook and a popular star (or sometimes just a unique hook). 1982’s Zapped! might be the poster child for this concept.

Scott Baio plays Barney, a high school genius who has free range of the school’s science rooms and equipment. Apparently at his school this is allowed, along with students drinking beer on campus and growing weed in utility closets. One day, while conducting an experiment, some ingredients get inadvertently mixed together and an explosion causes Barney to receive powers of telekinesis.

His best friend, Peyton (Willie Aames), has a fun time exploiting Barney’s powers. However, Barney’s new girlfriend, Bernadette (Felice Schachter), disapproves of the boys abusing it for their own gain. Barney is completely reckless and doesn’t ever try to hide his powers, yet firmly states that no one can ever know about them.

The rest of the film plods along trying to find its footing, but rarely ever does. We can overlook a silly movie obsessed with farting and cheerleaders at baseball games if it has narrative integrity. Much of this movie is eye-rollingly all over the place, having no clue what to do with its premise. By the third act, Barney’s telekinesis is seemingly forgotten about and the film turns into a rom-com, wasting a perfectly good concept.

Considering the movie is about Barney, it really has no business delving as far as it does into secondary characters’ lives, but undoubtedly does so to take up time.

But Zapped! isn’t all bad. It refreshingly throws once-existing stereotypes of school nerds out the window. Barney is a smart, but he’s also a popular jock, so Baio makes sense for this part. While Barney is sort of an unrealized character as a whole, Baio does well to make his character likable and handles the juvenile material in a somewhat classy way.

Zapped! is initially entertaining due to its intriguing premise, but once that gets lost, we’re no longer curious about what’s going to happen, only frustrated that we get robbed of the payoff. Luckily the film is still watchable due to its charismatic leads and occasionally humorous anecdotes.