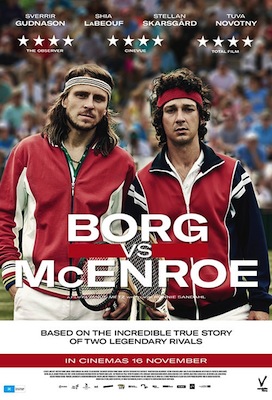 When you think about it, Shia LaBeouf is perfect for the role of the mercurial tennis player John McEnroe. No one else can be so effortlessly unhinged while making it seem so natural. He’s been dong this for years, going back to his comedic roots with the Disney Channel show, Even Stevens.

Borg vs. McEnroe is funny at times, almost always due to Shia’s spot-on outbursts, but the film isn’t a comedy. While showing glimpses of McEnroe’s upbringing and life during the dawn of his career, the story revolves mostly around Swedish tennis superstar Björn Borg (Sverrir Gudnason).

Growing up in Sweden, Borg was somewhat of a troubled kid with a temper and an uneasy relationship with his parents. He wanted to pursue tennis, but his father lambasted him for it. Tennis was a rich person’s sport, and Borg’s family definitely wasn’t that. As a teenager, he was discovered by former tennis player Lennart Bergelin (Stellan Skarsgård). Bergelin makes a deal with Borg that as long as the youngster promises to never show an ounce of emotion ever again, he will be his coach and mentor. From then on, Borg is subdued. A well oiled machine who never gets upset. Publicly, that is. Little does anyone know, he’s boiling inside. He goes on to be the youngest tennis player to win Wimbledon, and the first to win four consecutive Opens, going for his fifth straight in 1980. But there’s a new player being chattered about. A villain, so to speak. And that is John McEnroe.

McEnroe is like a pit bull on the court, always getting in trouble for yelling at officials during matches. He’s reviled by millions of fans around the world, and gets perennially booed during his 1980 tournament run in London. To McEnroe, he doesn’t get how Borg remains so calm, but Borg sees himself in McEnroe, or maybe vice versa. He sees what he could’ve been if it hadn’t been for Bergelin’s taming. But part of him believes he may have been even better if he was allowed to be himself, much like McEnroe, wearing his emotions on his sleeve. It’s cathartic for him to see McEnroe succeed, allowing him to be at peace with who he would’ve been.

We see how McEnroe also had an uneasy upbringing with his parents. He came from prestigious wealth and his parents wanted him focusing more on his studies, rather than wasting his time with sports. We’re led to believe he grew up wilder perhaps because his parents were working so much, not there to contain him. Apparently that’s what money does to some people. Borg came from poverty, which was uncommon for such a prestigious sport, so he had more to lose if he were to act out. Onlookers would undoubtedly trace it back to his circumstance.

It’s a misdirect to present this story as that of a rivalry. In the strictest sense, sure, the two tennis legends met in the Championship match a couple times, but they weren’t enemies at all. (In fact, Borg was McEnroe’s best man at his wedding.) Borg vs. McEnroe is more about how two opposite men, according to the public, were very much the same as one another. Though one was loved by millions, while the other was hated by even more–all because of the amount of temperance each one had, or lack thereof.

This film portrays McEnroe as misunderstood, though we wish we could see more behind the curtain to his life, rather than gathering our details from inference. He’s just as intriguing (and far more entertaining) of an individual as Borg, yet we see so much less of him.

Nonetheless, Borg vs. McEnroe builds drama well on a personal level and gets pretty deep. The fact that it can tell us so much from the limited information it gives is impressive, becoming one of the more effective character study sports films, thanks to a great script and brilliant performances.