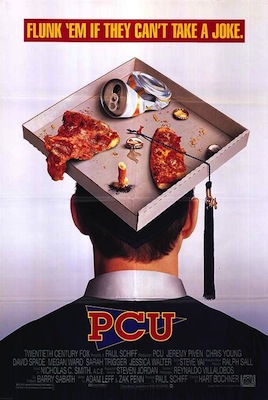 PCU, standing for Politically Correct University, is a chillingly accurate prediction of the future. In 1994, I’m sure this was an esoteric satire meant as an exaggerated version of a small percent of an even smaller percentage of college campuses, but in 2020 the social commentary feels like less of a hyperbole. I don’t think a movie like this could be made in today’s world. It would immediately be written off as unrealistic propaganda by the exact people who are satired within the film. Yay for free speech!

But PCU doesn’t just mock liberal extremists. It also pokes fun at Reagan-era conservatives, stoners, and a couple other college archetypes. The New England campus is run by President Garcia-Thompson (Jessica Walter) who encourages daily rallies from various interest groups and not-so-peaceful protests around campus. At one point she’s overheard discussing plans of opening a bisexual Asian studies building at the expense of the math department.

The bane of her existence is a group of students living at The Pit, a former fraternity house turned into a party-centric hangout by anti-protesting hedonists whose main goal is to have fun and to disrupt the ridiculous rallies around campus. The Pit is led by Droz (Jeremy Piven), a brash senior who is several write-ups away from expulsion.

The extreme leftist Garcia-Thompson conspires with Rand (David Spade), the leader of a right-wing elitist student group, to get rid of The Pit altogether by setting them up for situations in which they would undoubtedly mess up and get fined so much that they can’t afford rent on their house anymore. So Droz and his crew plan to throw a giant party in order to pay the fines issued to them and save The Pit.

This movie is very enjoyable with some truly hysterical moments–especially if you’re not offended by an anti-liberal agenda (I’m definitely not). PCU is a sum of its many parts, but without Piven that’s all it would be. He brings so much to the table, resting the film almost entirely on his shoulders. We’re curious how he didn’t land more of these types of roles (essentially Ari Gold one-offs).

PCU isn’t perfect, and loses its footing and purpose entering into the third act. I think the filmmakers realize they don’t care as much about their point as they do with having fun with their movie. And I suppose that appropriately falls in line with their protagonists.

The philosophies–or lack thereof–of The Pit are shameful at times, but that’s not the point. The characters that reside there are made to be the most likable in this movie in order to show that being an extreme on either side isn’t going to change anything. And often times makes everything worse. In most arguments, if one side gets loud, the other side gets louder. In a film world where extreme political views exist to this degree, its the heathens who pull through in the end. Not because they’re right, but because their expressive apathy in an attempt to match the other groups’ extreme actions is more appealing to those who tire of being extreme. Even today, PCU is still somewhat of an exaggeration, but the end result might be foretelling.

PCU ultimately doesn’t do quite as much with its brilliant premise as it should–and believe it or not, could probably be even more politically incorrect–but the movie definitely serves as a launching point for the conversation.