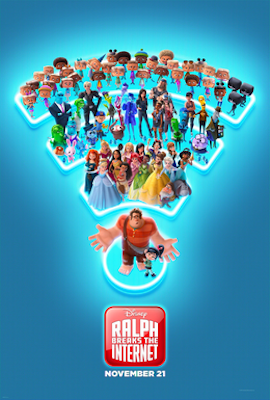 When a movie touches you on an emotional level, you tend to like it more. But what’s really impressive is when you’re already loving a movie before that emotion hits you at all.

In the previous movie, the two leads become unlikely best friends. Since then, they’ve spent every day with one another for six years straight. Ralph is perfectly content with his life, but Vanellope longs for something new. Her repetitive racing game is getting boring and she feels like her talents behind the wheel are being stifled. Ralph has the idea to “make” a new track inside her game by altering a lot of the programmed scenery. Vanellope loves it, but the actual human playing the game fights back when Vanellope tries to take over the controls and the game’s steering wheel breaks off. The arcade owner, Mr. Litwak (Ed O’Neill), doesn’t want to buy a new part on eBay since the game, itself, isn’t even worth all that much money, so he decides to unplug it indefinitely.

Determined to save his best friend’s game, Ralph has the idea to go into the internet himself to get a new steering wheel, taking Vanellope with him. Since the arcade’s wifi system is brand new, they have no idea what they’re in for. In their minds, they think the internet is just a new game. But upon arrival, they soon realize they’re competing with billions of other users to get around this physical incarnation of the world wide web. This metropolis is filled with skyscrapers representing actual websites like Google and Amazon, click-bait ads in the form of carnival barkers, and each human in the real world has a mini avatar version of themselves running around robotically like ants marching–except they’re inside pods from the Jetsons.

Ralph and Vanellope eventually find eBay and must now engage in a bidding war for the steering wheel. In one of the greatest scenes in comedic cinema history, they end up winning the item, but have no way of paying for it. This ignites their journey of trying to navigate the internet for real, figuring out how to make enough money (it’s a large sum) in 24 hours.

Ralph Breaks the Internet benefits from the relationships and functionality of the film universe being already established in the previous movie. Both Wreck-It Ralph and Ralph Breaks the Internet are gimmick-based, but this time around the gimmick isn’t the sole focus and doesn’t precede the film itself. The world of the internet is obviously infinitely larger than that of a small arcade, and because directorial duo, Rich Moore and Phil Johnston, know they can’t explore everything, they don’t try to. In Wreck-It Ralph, the world is so small that every nook and cranny has to be explored. And though that helps us get a good feel for things, those kind of requirements would have hindered a more natural flow of the narrative this time around. So Ralph Breaks the Internet doesn’t try to show us every intricacy of its world, but we never feel robbed of any aspect of this new premise and setting.

As for the emotional part mentioned above, this movie develops characters more naturally than any animated film I’ve seen other than the Toy Story franchise (except number 4). And without giving anything away, Ralph Breaks the Internet handles situations at the end the way Toy Story 4 should have handled them–and with relatively (and objectively) smaller stakes. Emotions get validated and character investment gets a proper payoff and acknowledgement. Sorry, I’m still bitter.

If Wreck-It Ralph was a brilliant “what if?” scenario, then Ralph Breaks the Internet is a brilliant “what if?” of a “what if?” scenario, taking what we love about the first film and raising the stakes. The world grows and so do our characters. We don’t get a villain because the real antagonist is the man in the mirror–oh yeah, and the great big world out there that helps you see that mirror more clearly. It can work for you or against you, depending on how well you utilize your own gifts.

I guarantee you this sequel isn’t just the cash grab you may think it is. Trust me, it’s really good! Personally, I liked it better than the first.