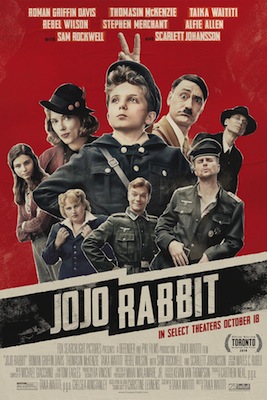 I walk into almost every movie with the expectation of its narrative staying at a consistent pace throughout. The beginning of Jojo Rabbit shares the subtle humor and symmetrical simplicity of a Wes Anderson film. A type of movie that, for all intents and purposes, is achingly slow by nature. And about 30 minutes in, I’m already not connecting to it, much like how I don’t connect to Wes Anderson’s movies. Thankfully, the film is not directed by Anderson, who would have undoubtedly kept the auteur-like even pace, thus maintaining it’s distance from me as I watched on. Fortunately for Jojo Rabbit, it does not posses an even narrative. It picks up as the story unfolds.

Jojo Rabbit, written and directed by Taika Waititi, follows a ten-year-old boy, Johannes “Jojo” Betzler (Roman Griffin Davis), living in Nazi Germany during World War II with his mother, Rosie (Scarlett Johansson). Jojo attends a Hitler youth training camp where he is learning how to become a Nazi. His imaginary friend is a childish version of Adolf Hitler, played by Waititi himself.

Our young lead is patriotic and dedicated to the Nazi effort, but he discovers a teenage Jewish girl, Elsa (Thomasin McKenzie), hiding in a secret room inside his house. He finds out that his mother, who he is very close to, has been keeping her up there. Elsa becomes domineering over Jojo and threatens to kill him if he tells his mother what he knows.

Jojo hates Jews because that is what he is taught. As his father is absent in his life, he’s been molded by the adult males surrounding him–and even imagines Hitler as a sort of fatherly figure. Elsa is slightly older than Jojo, and much wiser. Her influence on his life is an important one, as is his mother’s. If there is any chance of his saving, it’s going to be by the female impact in his life. Needless to say, our protagonist doesn’t maintain his Nazi mindset throughout the whole story, as this movie is made to lambast the infamous “political party” after all.

It’s odd, however, that it took this long to get a Nazi satire movie with this much notoriety, considering it’s been 75 years since the end of World War II. Better late than never I guess. But Waititi never feels constricted by this pressure throughout his film. He takes some fun creative liberties: using anachronistic music, making Hitler our protagonist’s imaginary friend, or having obviously-Australian actors fail at speaking in German accents. But one could say he takes almost too many creative liberties early on, nearly losing his audience before the movie gets good.

For much of the first half of this film, I found myself not connecting to the story. The tone lacks a certain consistency and tightness. And the satirical nature, albeit well-deserved, prevents the audience from becoming fully invested. However, the movie switches into a new gear halfway through, and finishes off with an absolute masterful final act.

Jojo Rabbit is an odd movie in many ways, but perhaps most notably for its performances. Waititi doesn’t even try to make sure his actors get the German accent right–a must for every other movie to be lauded for its acting. But this film is different than most critically acclaimed projects. The director knows that the flubbed accents may add to the irreverent humor, and places all of his focus on making sure his actors convey the required emotion instead. And they mostly do.

This is a movie that largely receives acclaim for its performers based on their characters’ emotional journeys and/or their relationships with others in the film. Johansson is a perfect example. Her acting lacks a certain believability in the role itself, however, we love her bond with her son and the quirkiness that comes out as the story progresses. I like how she handles her relationship with Jojo more than I actually like her performance.

For Davis, the accolades coming to him are largely because of the emotional transformation of his character, evident by his performance early on, when he still possesses an aggressive Nazi mindset. During those early scenes our protagonist isn’t only  unlikable, but his acting is largely mediocre. It’s not bad, but not nearly award-worthy. However, the young actor improves as his character does.

Sam Rockwell, who plays Klenzendorf, the captain of Jojo’s camp, and is usually brilliant in everything he’s in, provides comedy early on, but doesn’t necessarily provide the same kind of impact he usually has on a movie. However, his character is pretty interesting. A guy who is no longer allowed to fight in the war due to him losing one of his eyes, Klenzendorf has a dwindling faith in the Nazi party, but is still there out of commitment. In a way, he’s sort of adjacent to Christoph Waltz’s character in Inglorious Basterds, who is merely just committed to “doing his job” of turning in Jews. Rockwell’s role in the war is different, but he’s still there, too, out of commitment. The difference is Klenzendorf has a heart and his character adapts.

Jojo Rabbit is the type of movie that you’ll like because making fun of Nazis is fun. At times you think the film is going to forget about the actual tragedy that took place during the War, but Waititi sees that it doesn’t, ensuring his story packs a big emotional punch as well. As flippant of a tone this movie has–especially early on–the affect it has on our hearts is our biggest takeaway. Perhaps made more powerful due to that very same tonal contrast.