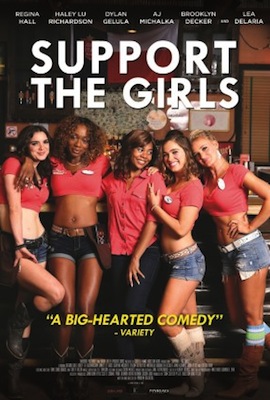 Perhaps my introduction to mumblecore shouldn’t be a film released on the backside of the sub-genre’s peak. But according to my brief research and limited knowledge, few would argue that my introduction should be by any other filmmaker than Andrew Bujalski, dubbed the Godfather of Mumblecore.

And boy, do the characters in Support the Girls mumble. I can’t tell you how many times I had to rewind the movie in order to hear crucial lines of dialogue. In a film genre that prioritizes dialogue over plot, I felt like I wasn’t meant to hear half of the words in this movie.

In this very low concept film, Regina Hall plays Lisa, the manager of a sports bar, Double Whammies, where the waitresses dress in skimpy tops and hot pants. Lisa has to maintain a positive attitude all while having to deal with an incompetent and racist owner, abusive customers, and immature employees, including one who hired his cousin to rob the restaurant’s safe. Oh yeah, and her husband is in the process of moving out for reasons we can only assume.

Hall does well to ground the film, but has little support to back her up. The rest of the performances are either hit or miss. And even the hits have some weak spots as well. Performances lack conviction, and the ones that don’t get the misfortune of sloppy takes. AJ Michalka as former waitress, Danyelle, is one of the exceptions, though her screen time is all-to-brief.

Support the Girls only touches upon the personal lives of the characters surrounding Lisa, but she’s our main focus. Yet, there is still some important background about her own situation that we merely get glimpses of. Certain details are haphazardly glossed over, while we get a thorough look inside other more unimportant aspects of the story. We almost get the sense that Bujalski prides himself with being ambiguous with the details, though not necessarily frustratingly so–we’re still able to enjoy the movie enough without feeling completely left in the dark. We understand that it’s an artistic decision by the filmmaker, so we mostly just accept it.

As a whole, the script, also written by Bujaski, has a certain unrefined quality, which I’m sure is common amongst its contemporaries. I’m not usually a fan of somewhat plotless movies, but there’s a certain acquired taste that this film’s charms will appeal to. Maybe I just haven’t acquired it yet.

The tone is lighthearted, but rarely is the movie ever funny, or even smile-inducing. Although, being a diehard Golden State Warriors fan, there’s a bit involving a Stephen Curry tattoo that I couldn’t help but chuckle at.

Bujalski’s angle is somewhat unclear. We’re never quite sure where he stands regarding these “breastaurants”. Usually in movies about women in professions where they sell their bodies, we garner an empathy for them. However, in Support the Girls, the point of view is from the manager, who isn’t in that role–she’s always fully clothed. We see how she manages these girls who have been dealt a bad hand in life, but we are also never able to see what those bad hands consist of outside of a rough work environment. So we’re left only with Lisa, an intriguing character, sure, but hardly a justification for everything going on around her. We’re not even sure what drives her to care so much.

Also, I get the film is an ode to the working woman, but it also has a one-dimensional view on men in society, telling us that we’re all pigs who only care about two things–women and money. Literally every man in this movie plays an antagonistic role.

Support the Girls depicts a not-so-classy occupation in a somewhat classy highbrow film. This isn’t your Coyote Ugly. Instead, audiences get a story grounded in “harsh” realities amidst a music-less background and it’s admittedly intriguing at some level. Unfortunately when a little-talked-about topic gets the big screen treatment, we don’t always get a choice what that treatment is. Amongst a few bright spots, we’re subject to a stream-of-conscious narrative with surprisingly low stakes considering the subject matter.