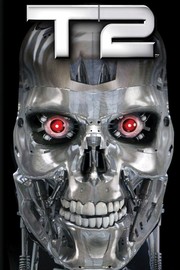 The memory of Terminator 2 from my childhood is a foggy one, but I remember, as a child who couldn’t have been any older than 10, that I really liked this movie. There were scenes that, to this day, have stuck with me. I remember the ending almost shot-for-shot as I rematch it some 16 years later.

I like the first Terminator film a great deal, but it has that ’80s feel to it and it’s very dated. But the 1991 sequel is ahead of its time. And 24 years later, It holds up perfectly–just as my memories of it as a child.

In this movie, a cyborg (Arnold Schwarzenegger), looking exactly like the one who tries to kill Sarah Connor (Linda Hamilton) in the first film, is sent back to the past to protect her son, John Connor (Edward Furlong), who is being hunted down by a more advanced evil cyborg (Robert Patrick) who can morph into any person or metal object.

The plot is more developed and longer. We realize that there is more at stake here. We know the background already and know who must live and who must die. At 2 and a half hours, the movie never seems to overstay its welcome.

Schwarzenegger has never been more perfect for any role he’s played. He’s truly at his best and even displays his comedic talents. Patrick, playing the main antagonist, creepily stalks Sarah and John throughout the whole movie, evoking true fear from the audience.

This is a near-perfect cinematic experience. It’s one of my favorite films and it’s even better watching it with more context than when I was a child.