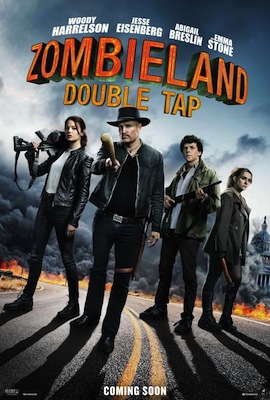 I’ve waited a decade for this movie!

Ten years is a long time, even during the apocalypse, and a lot has changed since the original Zombieland was released back in 2009. In that time, there’s been a drastic influx in the amount of zom-coms available for our consumption. I guess we’ve realized the obvious–zombies are inherently funny. They’re brainless, lemming-like creatures who are easy to make fun of (insert witty comparison here).

Luckily, writer/director Ruben Fleischer and his crew recognized their “competition” and accompany the time gap with some new ideas and unique quirks to help make Zombieland: Double Tap every bit as enjoyable as the original and worth that long ten-year wait.

One of the things that makes the first film so beloved is the road trip aspect. Four people, united by the end of the world, traversing what’s left of the United States while avoiding contamination with the virus that helped bring down civilization. You hope for that same spirit this time around, too. At first I was a little worried when things began with a halt. Our four protagonists, Columbus (Jesse Eisenberg), Tallahassee (Woody Harrelson), Wichita (Emma Stone) and her younger sister Little Rock (Abigail Breslin), are seen enjoying their lives together in their little makeshift home, the White House.

Fortunately for the entire audience, we soon realize this static start is merely a necessary evil in order to justify the characters eventually heading back on the road. You see, it’s easy to become complacent in this post-apocalyptic America. You don’t want to be running all the time. But what they soon realize is the road is where they’re meant to be. The gang originally came together on the road, and the road brings out the best in each of them.

Also, it’s much safer to be on the move due to the evolution of the undead over the years. Now, there are several types of zombies, each colorfully named after extinct pop-culture references. Some are very dumb (these are called “Homers”), while others are super-evolved and take multiple bullets to kill (these are called “T-800s”).

Their new road trip is catalyzed by the sisters, Wichita and Little Rock, feeling suffocated by the two men at home. Columbus gets the courage to propose to Wichita, which scares her away, while Tallahassee, the eldest of the bunch, is acting like an overbearing father with Little Rock, who’s dying to find someone her own age. As the girls journey aimlessly, they meet a pacifist hippie dude, Berkeley (Avan Jogia), who eventually inspires Little Rock to run off with him to a peaceful commune where nobody has weapons of any kind. Mind you, the world has been overtaken by zombies.

This is where Double Tap has some things to say, but opts for more subtle humor which satirizes its opposition, rather than treading the unpopular waters of its message (unpopular in Hollywood, anyway).

Wichita, realizing she needs help–and maybe also misses her two guys–goes back to the White House and asks Tallahassee and Columbus to help her retrieve her sister. As the group heads back on the road–where we want them to be–they come upon a variety of characters along the way.

Zombieland isn’t just driven by its atmosphere and setting. The film’s tone is carried by the sarcastic irony of its leads – notably Eisenberg, whose dry, neurotic delivery is the ultimate counterpoint to the goofy, yet terrifying nature of the zombies. And, of course, Woody Harrelson’s wildly erratic Columbus, who not only delivers many of the funniest scenes but offers a deeply sympathetic take on the world’s last redneck.

Double Tap doesn’t necessarily do as much with the exploring its main characters, but still furthers their individual stories nicely. The original Zombieland focused solely on the core four – with the exception of the famous Bill Murray cameo – but this time around they’re discovering more and more living humans amidst a world taken over by the undead. Fleischer and the writing team of Rhett Reese, Paul Wernick, and Dave Callaham weren’t content with just retreading the same story and characters again, so they’ve livened things (no pun intended) with a few welcome additions as well.

And the additions are all fantastic, with several highlights. One being Zoey Deutch as the clueless valley girl, Madison, armed only with a can of pepper spray, briefly acting as a rebound for Columbus after Wichita leaves. Deutch commits so hard to this very specific role without ever throwing off the balance of the already-in-place dynamics. She only enhances it.

Another brilliant scene comes when our leads meet Albuquerque (Luke Wilson) and Flagstaff (Thomas Middleditch), two humans who strongly resemble Tallahassee and Columbus, respectively. The deliciously appealing scene is hysterical as the pairings riff off of each other. This sequence would have been too short no matter how long it was. It’s a perfectly bizarre moment which never feels out of place in a movie that’s cultivated such a specific tone.

Credit to everyone involved, this movie does well to match the lofty standards set by its predecessor while also not becoming trapped by them–even doing certain things better. For one, it provides us with more thrilling moments, trading character development for a consistent dose of suspense.

For ten years, we’ve wanted a new story for our survivors-turned-family, thanks to an unexpectedly appealing world built by Fleischer and the unique dynamics of his stars. Zombieland: Double Tap finally gives us just that, meshing further into the post-apocalyptic universe, while perfectly standing on its own as an excellent movie.

Originally published on October 26, 2019 at https://www.popzara.com/movies/movie-reviews/zombieland-double-tap-2019-2/