A couple of weeks ago I posted my ranking of every Boy Meets World episode ever. And with the amount of great one-timers the show had, it didn’t feel right not to pay homage to them. This is my way of honoring the amazing characters who showed up in one episode never to be seen of or heard from again.

For the casual fan, these names may only ring a faint bell. But for the diehards, you’ll know them well.

One-off characters don’t get much recognition. They show up in one episode, and serve basically no purpose to the overall series. But they live in our hearts forever. The casting directors over at Boy Meets World sure knew how to pick phenomenal talents to showcase their writers’ equally brilliant work.

It’s hard to pick just 15 (I originally was going to do 10, but couldn’t make up my mind), but here you have it–Boy Meets World’s best one-off characters:

15. Victor the Animal Control Guy (from episode 306 This Little Piggy)

During the height of both Boy Meets World and Home Improvement’s success, the ABC shows do somewhat of a crossover episode with Richard Karn playing an animal control officer on the former. He’s different from his usual Al Borland character on Home Improvement. Here, he’s dry and aggressive. It works well. He gets in and out without completely stealing the show, but it’s definitely the highlight of the episode.
Best Line:
Victor: Topanga Lawrence: Been going out with Cory Matthews for 2 months…I’m way overqualified for this job.

14. Grandma Bernice (from episode 107 Grandma Was A Rolling Stone)

It’s always been a wonder to me why Rue McClanahan never reprises her role as Cory’s grandmother (Alan’s mom) in the series. She’s a adventurous drifter-type who’s fully embracing old age, living in her Winnebago full-time. And she’s not without her faults. Apparently she’s a bit of a flake, but she means well. It’s something that allows Cory and his dad to bond over, ultimately bringing them closer together. Her brief scene with Mr. Feeny is just a glimpse of what could have been if her character had returned.
Best Line:
Grandma Bernice: We are gonna go get this baseball card signed by the guy in the picture.
Cory: Cal Ripkin??? This is Cal Ripkin’s rookie card! How’d you get this?!!
Grandma Bernice: How’d I get it?? I shot a man in Reno just to watch him die. And then I pried that out of his cold dead fingers…Or I bought it for seven bucks at a swap meet.

Boy Meet World never shies away from its quasi-meta guest stars. And here they cast Dan Lauria, better known as playing the dad on Wonder Years (Ben Savage’s brother was the star of that show). Lauria plays Judge Lam, a stern, balloon-animal-making Judge in a rural town that has Cory on trial for driving 1 mph over the speed limit. He saves an otherwise mediocre episode and not only salvages it, but gives it meaning.
Best Line:
Judge Lam: It’s a speed trap.

Played by Jonathan Del Arco, Nunzio is the Latin-inspired coworker of Topanga and Angela. Cory and Shawn are jealous that their girlfriends keep going dancing with Nunzio after work, but I’m sure they have nothing to worry about since Nunzio is too much of a caricature to have any real depth. But his cockiness is so over-the-top that it’s silly and enjoyable to watch.
Best Line:
Topanga: I don’t care if he won’t dance. I miss him.
Nunzio: He misses you too–of this I am sure!

There are only a handful of one-offs who get an entire storyline dedicated to them. Corrina (played by Leisha Hailey) starts out as a perky guitar-playing busker outside of the Matthews’ wilderness store, only to become a massive overnight hit once Eric makes her mad and inspires her to write angst-filled rock songs a la Alanis Morissette. Although she loses some of her comedic appeal once she becomes angry, she ends up returning to her Annie-singing-self in the end.
Best Line:
Corrina: I mean, I don’t know what Uncle David could have possibly meant by life experience. I’m 18 years old. I’ve been to sleep away camp. I even got on the wrong bus once. I had a goldfish who died.

Usually the good one-offs are a product of their episode (i.e. a good episode produces great one-offs). But Milton (played by Phil Leeds) is definitely the only real bright spot in a bleak episode. It’s not about what he says, but his brilliant, unenthusiastic Ben Steinian delivery. Cory and Shawn accidentally make it onto a prestigious high school quiz show, suddenly boosting the show’s popularity and making the producers clean house to match their appeal. However, as the show gets a younger host and adds background dancers, the octogenarian announcer inexplicably remains in place. The folks over at Boy Meets World loved this actor so much, they used him three times throughout the series as three different characters.
Best Line:
Milton: Hey hey hey, it’s hot, it’s steam, it’s Oahu Beach.

Another episode-saver is Judy Haberfeld (played by Meagen Fay), the wedding coordinator that insists you call her by her full name, and only her full name. She’s hilarious and convincing–and doesn’t want anyone making any jokes. They could have totally used her more in future episodes–or even more in this episode. If nothing else, watch it for her brief appearance towards the end.
Best Line:
Topanga: We’ve heard wonderful things about you, Ms. Haberfeld.
Judy Haberfeld: Aww, please call me Judy Haberfeld. 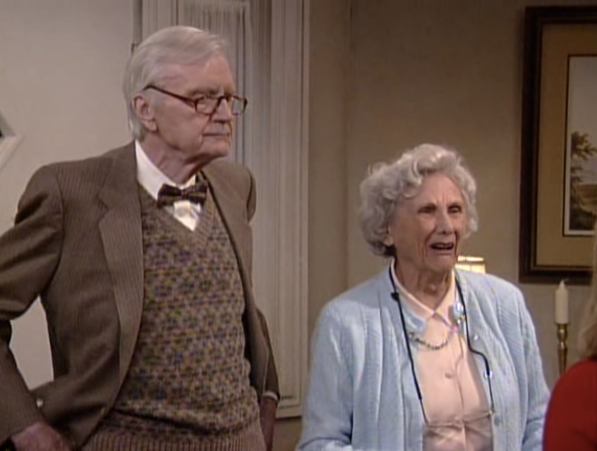 So technically, they’re in two episodes, but it’s a 2-parter, so it counts! The only problem with them is that they aren’t featured nearly enough. In their short time on screen, you wonder why they can’t stay around longer. Their dynamic with each other is perfect. His stern straight man perfectly balances out her cluelessness. Portrayed by Bill Morey and Connie Sawyer, the husband and wife duo intends to marry Cory and Topanga when they elope. Foofie’s real name is Bafoofta.
Best Line:
Judge Bemis: This is my wife, Bafoofta.
Foofie: Our one friend calls me “Foofie”.

In the episode where Cory’s hypochondria is unearthed, it’s also discovered that he has an uncle who thinks he’s Sammy Sosa. At the end of the episode, Uncle Maury (played by Ralph Manza) shows up and does a routine about his escape from the mental hospital in order to keep up with Mark McGwire’s chase for the home-run record. It’s a total 90s scene, and it merely serves a comedic purpose and nothing else–which is great! There’s nothing like seeing him do the famous Sammy Sosa post-home-run gesture.
Best Line:
Uncle Maury/Sammy Sosa: I’m nuts, didn’t he tell ya?

Played by television icons Buddy Hackett and Soupy Sales, the two old-timey mobsters, a la Tony Soprano, sit in their restaurant all day and drink Cappuccino–yet it seems as though nobody patrons their business. Cory gets hired on as a waiter, and begins running errands for these two guys as they occasionally slip him twenty dollar bills. Shawn informs Cory that he’s working for the mob, leading him to quit. Shawn then picks up the now-open position. It may take comedic legends to keep up these personas for the duration of an entire episode, but Hackett and Soupy still do so with ease.
Best Line:
Mr. Fountain: You take this envelope. You go to the mailbox on 14th and Pine. […] And put this in there.
Cory: Okay, now you both know how I’m not one to ruffle feathers, but there is no mailbox on 14th and Pine.
Mr. Fountain: Today, there’s gonna be a mailbox on 14th and Pine.
Mr. Martini: And Mr. Fountain is never wrong about mailbox placement.

Theresa Keiner, or TK (played by Danielle Harris), is perhaps the best female character ever written into the show. The school bully, Harley Keiner, is her brother, but she has the hots for Cory. She’s a little too clingy for him, always buying him gifts like sirloin steaks and 4-foot clowns made out of candy. She takes the episode into her grasp and owns it. So much of her character is developed over the short span–furthering Harley’s development as well. In the end, we leave off with her and Cory making things work out–relationship in tact. You just wish that they could have extended that arc for a couple more episodes.
Best Line:
TK: Mr. Turner, is it okay to sit two to a desk?
Mr. Turner: I’m thinkin’ no.
TK: For a five spot?? Child actors nowadays are often hired for cuteness over talent. The young actor, Jonathan Osser, playing Billy isn’t necessarily overly-precocious, but his perfect mix of bratty and wit serve his character, and the episode, well. In the episode, Cory is “helping” Topanga babysit, but instead, undermines her authority and lets Billy watch TV and stay up past his bedtime. Billy is wise beyond his years and teams up well with Cory and his antics. This is the 2nd one-off from this episode.
Best Line:
Topanga: What were you doing?
Billy: I love you?

He has a screen time of about 1 minute and his presence is so random, but his exchange with Cory is one of the highlights of the series–let alone the episode. Played by Dick Van Patten, from Eight is Enough and some Mel Brooks films, the Amish Farmer is one of the brief glimpses we get of rural Pennsylvania–which isn’t too far away from Philadelphia, where the show takes place. Cory attempts to hitchhike home, but the Amish Farmer is the only person who stops–doing Cory no good, since he’s driving a horse and buggy. It would have been tough to feature the character ever again in the series, but pound for pound and line for line, he’s one of the best characters in the series. A short but sweet performance that we will never forget.
Best Line:
Amish Farmer: I’m going as far as…that farm house, there. 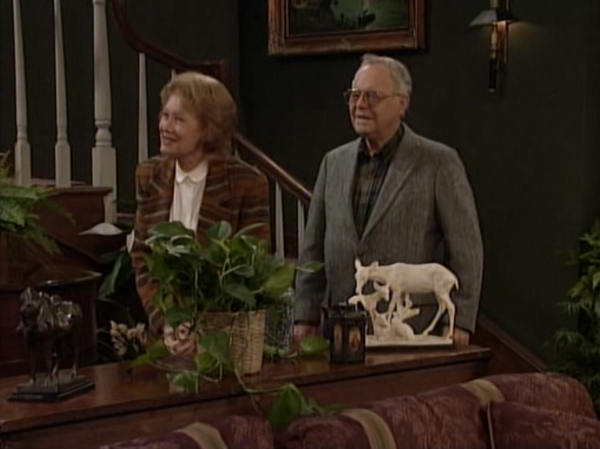 Played by Gladys Holland, Mrs. Timmer has only four English words in her vocabulary. Four magical words. But that’s all she needs. Her husband, Mr. Timmer, doesn’t speak at all. Together, they transform a really good episode into a memorable one. Shawn and Cory turn Feeny’s house into a bed and breakfast while he’s away on vacation. This episode is full of great one-offs from all of the guests who are staying with them. But the Timmers are the highlight. It’s not just that Mrs. Timmer delivers her four words once, but several times throughout the episode. And here’s the thing–it never gets old.
Best Line:
Mrs. Timmer: We are the Timmers!

1. Reginald Fairfield (from episode 308 Rave On)

Who knew that Davy Jones had comedy chops? His presence throughout the episode is remarkable, giving him the top spot on the list. He just so happens to show up at the Matthews’ front door, met with some bewildered responses. Apparently he followed Amy and Alan on their honeymoon across Europe and has now tracked them down 20 years later. After the Matthews get rid of him, he freeloads off those around him–including Mr. Feeny. It’s an amazing concept for a one-off. He’s annoying to the characters around him, but we, the audience, love him to death. However, much like most of the people on this list, his future presence would just be unwarranted. But he makes this episode endlessly rewatchable.
Best Line:
Amy: Who are you??
Reginald Fairfield: Reg! Reginald Fairfield!

There you have it! My ode to the one-timers who graced us with their brief presence. Let me know in the comments who your favorites are!