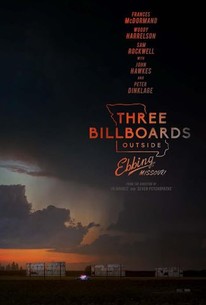 I sure wish writer-director Martin McDonagh would make more movies. He only has three, but they’re all highly regarded. His 2012 film, Seven Psychopaths, is one of my all-time favorites.

His newest movie revolves around Frances McDormand’s character, Mildred, renting three billboards outside of town in order to put a message on them criticizing the local police chief, Bill Willoughby (Woody Harrelson), for not solving the case of her daughter’s rape and murder.

This plays with our own gut reactions, as we quickly shake our heads assuming that this must be another result of a corrupt system. It’s not. Willoughby actually becomes the film’s best character, grounding it and providing the one true conscience amidst everyone else’s anger and lack of forgiveness. You could make a case that he’s the real protagonist.

Much like in Seven Psychopaths, Three Billboards is character driven, but in a way that incorporates their actions as well as their given depth. They all have faults and make terrible decisions, but their peer’s counter-decisions is what changes them–even if their peers aren’t doing great things either.

Most of the characters are neither good nor bad. Much like most of us, they have their vices AND their virtues. McDonagh could have followed this sentiment with showing them, at the end of the day, being completely changed in every aspect. But he doesn’t. Because it’s never that easy in real life. It’s never that black and white.

The key to fully appreciating this movie is knowing when Mildred is wrong even when it’s portrayed that she isn’t. She’s always talking all high and mighty. It’s like arguing with a guy who thinks that just because he’s yelling, using big words, and sounds intelligent that he’s right.

The reason why Three Billboards is such a brilliant film is because McDonagh understands film formula so much that he knows how to perfectly subvert it without alienating his audience. It allows so much more to happen in a smaller amount of time. Much like Hitchcock used to do, he prevents everything from being streamlined or foreseeable, while at the same time not letting it become jarring. The abrupt tonal shifts are completely intentional and meant to be a simile for real life.

Sam Rockwell plays an extreme cop who handles situations with violence because he thinks he can always get away with it. Rockwell’s mercurial demeanor that he brings to many of his characters fits so perfectly with McDonagh’s style–which draws comparisons to the Coen Brothers (but with more warmth and realistic endings).

McDonagh has a love for the politically incorrect. He likes to draw humor out of situations that shouldn’t ever be funny. You might not laugh at first if you’re in a room with others because you’re unsure if you’re supposed to. Often times the joke is surrounded by very serious context. It’s because he knows that the best humor is rarely in the well-scripted dialogue, but in scenarios that are true to life.

McDonagh does well to keep his own ideals and agendas out of the movie. Though he slips up once in allowing his anger to enter in through Mildred when she rants about how priests should have culpability like the Blood and Crip gangs have in Los Angeles. It’s an odd choice for a person of power in this industry to promote culpability laws in his movies–especially at a time like this in Hollywood.

With that said, Three Billboards is truly a brilliant film, and another reminder of why McDonagh should have more than just three movies.