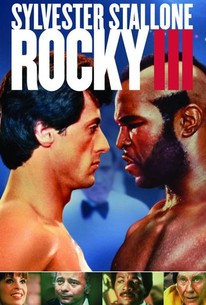 We’re officially into the ’80s now. And it feels like it. Things are a lot more campy. Mr. T is involved and everything he says is asinine. The film starts off with Rocky fighting a professional wrestler played by Hulk Hogan. It’s ridiculous, but so is the movie at this point.

Rocky Balboa is now America’s sweetheart. He appears on TV shows, he lives in a mansion, and his friends and family seem to be getting fed up with it all. I can see why.

Rocky has become unrealistically complacent. He is challenged by a boxer on-the-rise, Clubber Lang, played by Mr. T. Much to his trainer’s dismay, Rocky hosts a public training session filled with games, t-shirt booths, and an Italian band. And it’s all intercut with Mr. T’s serious workout regimen. I think the audience gets the point. He’s posing for pictures and kissing girls on the cheek while he’s working out. It’s silly. I get that his character is supposed to be more cocky now, but even this is obviously not okay. Over-the-top scenarios in order to drive home a point will always be too on-the-nose.

But then you realize that Rocky’s never really had it all that rough in the first place. Sure, he lived in a dump, but his career was essentially handed to him. So the spoiled and entitled mindset kinda makes sense.

Paulie has become obnoxious. Rocky flies to LA with Creed to train, and Paulie is unhappy being there. But I’m not even sure why he needs to be there in the first place. They decide that his character should be contrarian about it all, so every chance they get they make him say something negative. It’s annoying and he’s whiney. Stallone’s got this thing for stream-of-consciousness dialogue and characters saying what they feel in order to prove a point that the audience already knows, but sometimes it’s too much.

The first act or so takes awhile to get anywhere, but the second half is actually quite good. It gets comfortable in the formula it’s derived for itself. The formula that gives these movies such great finales.

I can see how this installment could be somewhat of a fan favorite. It’s got character and it’s fairly humorous in one of those you-don’t-notice-what’s-funny-until-you’ve-watched-it-twenty-times kind of way. It’s not as good as its predecessor, but I’d probably rather watch this comedy act than the first film’s self-aggrandizement any day.