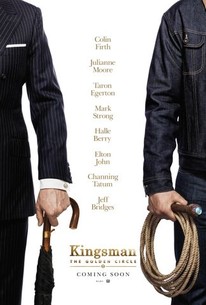 “Spy films are only as good as their villains.” This is pretty accurate. And the Kingsman series knows this. The first film had Samuel L. Jackson in one of his most unique roles ever. This one gets arguably even better with Julianne Moore as the twisted Poppy Adams.

Poppy heads the world’s largest drug cartel and operates from a remote location in the middle of the Cambodian jungle. It doesn’t look quite like a jungle though. She’s created her own little utopian village carved out of her own obsession with the 1950s. It’s awesome. The set, alone, would make this film memorable.

Luckily, it doesn’t have to. The Kingsman sequel is filled with fun action–albeit cheesy–and the same craftily written dark levity that’s become very unique to this series. Like a twisted Tarantino film where you don’t actually witness all the violence. It lets you see some of the sadistic scenarios, then letting your imagination figure out the rest. But the humor is never too off-the-wall to where the oft-sappy tone seems out of place.

Kingsman 2 is very close to the first one in how good it is, but I think this one holds a slight edge. It’s less disjointed in its story–though the occasional sloppiness is still present. The film is so finely tuned, but there is a sort of lack of attention to detail that’s still evident–with both the script and the director. Although it’s usually innocuous, certain things are lazily missed. Or just dubious. Like, saying American Graffiti takes place in the 1950s, instead of the ’60s. Or forcing John Denver’s “Country Roads” into the movie by referencing it in relation to Kentucky–not West Virginia. Luckily these things don’t ruin the movie in the slightest. Maybe I’m just nitpicking, but these are really easy things to prevent.

Kingsman has a slightly different feel for a spy movie. It’s a lot more comic-booky in style. Perhaps due to it’s very specific sets and character attributes.

The film is really silly but also very, very cool. But it’s obviously a fan of the unrealistic. It works well for the action sequences, but not as much in the human situations. At one point, the two main characters are off-puttingly cheery following the death of their best friends and close colleagues. It’s an odd tonal shift.

Much like the first film, depth doesn’t come from the characters themselves. And anytime it does, it feels contrived. Here, it comes from the issues on drugs and drug use in the world. Poppy has laced all of her products with a virus that slowly kills whoever has used it. She has an antidote, but will only give it out if the country agrees to legalize the drugs. The President of the US sees this as an opportunity to get rid of the degenerates who use drugs. It’s obviously messed up, but it’s still interesting–and luckily improbable–food for thought. Whether the intention is to be deep or use it merely as a humorous choice for a conflict, it makes you think.

It’s also interesting to note that this is the 2nd Channing Tatum movie of the last few months to not only have John Denver’s “Country Roads” play a major part of the story, but to have his character living in Kentucky. Weird.