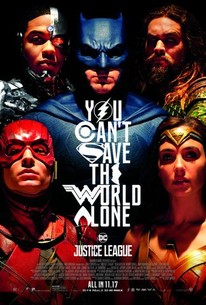 2016’s Batman v Superman is possibly the most criticized film of the last 5–maybe 10–years, and director Zack Snyder knew he had some work to do on the highly-anticipated followup, Justice League–which was already in production by then.

The premise for Batman v Superman sounded cool on paper, but couldn’t possibly be executed without creating an unrealistic series of events. Coupled with Snyder’s tendency to take his films way too seriously, the project just didn’t work. Some would say it was a such a good concept that the filmmakers simply tried too hard to bring it to fruition. But it was inherently flawed from the start. Justice League has no excuse.

When a film desperately tries to fix what was wrong with its predecessor, becoming solely what it thinks people want, it’s a recipe for disaster. The tone has a tendency to get weird because it becomes a paint-by-numbers.

I’m not sure if any film in recent memory has had the amount of skepticism as Justice League prior to its release. Christopher Nolan has all but spoiled our expectations for another good Batman film. Honestly though, we’re not going to get that kind of movie again. And no one is even gong to try.

For those of you who don’t know, Justice League is a film which teams up several of the superheroes from DC Comics, including Batman, Wonder Woman, and Flash. Following the death of Superman, the world faces some alien invasion or something. I dunno. It’s unclear.

This villain is completely CGI and uncompelling, keeping us properly distanced from the situation entirely. Which is a trend throughout this movie. Depth is always either forced or nonexistent.

There’s a scene towards the beginning which has Lois Lane talking to Superman’s mother about how bad Lois misses Superman and griping about her job at the Daily Planet. But why do we even care?? And why is this scene even in the movie?? I immediately tried imagining this film being in a Marvel movie and realized that I couldn’t. It’s more like something out of Grey’s Anatomy.

It’s almost as though the filmmakers are unaware of which direction they’re supposed to be going (we’re with them). They’re so concerned with having cliched drama that they’re fishing for humanity amidst a world that lacks it.

I’ve heard people ask time and again why the Marvel Cinematic Universe has a better reputation than the DC Universe. Simply put, they’re better films. Marvel has snappy dialogue, good acting, and they’re a lot more fun. They’re smarter and more self aware. They feature camaraderie between characters. There’s banter and you actually feel like you’re in on some cool exclusive club.

But boy, does it try to be charismatic with Justice League.

Just like the Wonder Woman movie, Justice League relies on one character to give it most of its levity–in this case, Ezra Miller as Flash. That’s not how this works. It’s like when Lil Wayne thought he could make a rock album simply by having all of his songs be about teenage angst. Just like how that was a misperception of the genre, this is a sore misunderstanding of how movies get to be funny and enjoyable.

The humor is even more cringy because you know why it’s there. I’d rather have two really good jokes than fifty throwaway ones. Especially jokes that are derivative and uninspired. The worst is when Batman (Affleck) tries to get in on the action with his modern straight-man delivery. It’s so odd hearing Batman try to be funny with the bat suit on. To the point where it feels like Affleck is actually performing a parody of Batman instead.

The action is much of the same as its predecessor–mostly boring and confusing. There’s a true sense of contrived intensity.

Batman v Superman had one thing going for it: The mystique of what’s to come. It teases us with cryptic introductions to characters possibly featured in the future (Wonder Woman, Flash, Aquaman). Of those, we get one origins story–this year’s Wonder Woman. As for the others–they’re all introduced here.

I kinda get why they rushed past all the other origins movies. The studio probably knew that if they didn’t get straight to this film then it may not have gotten made at all.

But there’s no true establishment of these characters in this movie either. If I was sitting in the theater and had no idea who Aquaman was, I wouldn’t care that he’s in this movie because they make no attempt to make you care. i’m not even sure they mention Flash by name.

DC films have a long way to go if they want to compete with Marvel. This year’s Wonder Woman was good. But it also had the luxury of having a different director and not suffering from panicky reshoots following the bombing of Batman v Superman.

There will be people who like Justice League. There are also people who like unoriginal rom-coms that merely go through the motions. Not everyone needs the movie to actually be good.

At first glance, Justice League is better than Batman v Superman. It makes all the obligatory changes. However, it also loses its identity in the process. It doesn’t seem possible, but in reality, Justice League is actually much worse. It’s a film of corrections–empty and uninspired ones. It tries to be self-aware, but ends up being the opposite. I’d be curious to see what Snyder would’ve done with the film if he hadn’t been merely trying to fix what was wrong with the first one. It may not have been great, but at least it would’ve been what he wanted from the beginning. And at least it would’ve been true to itself. Maybe then it would’ve been better.