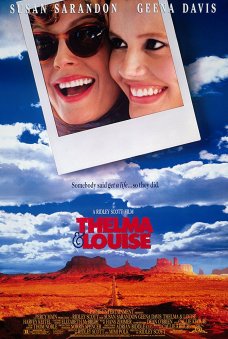 I’m not sure I’ve ever seen a film that so beautifully depicts the great American road while also showing it’s unforgivingness at the same time. A dichotomy that’s a consistent theme in Thelma & Louise.

Two best friends fed-up with the men in their lives and looking for a weekend away, set out on a road trip to exercise their freedom. But along the way they realize that exercising their freedom may also cost them their freedom as well.

Thelma (Geena Davis), a somewhat naive young woman with a neglectful and unappreciative husband, is looking to let her hair down and live a little, while Louise (Susan Sarandon), a brash waitress who sits around impatiently waiting for her boyfriend to commit, is sort of the adult in the room with Thelma. However, both women are constantly looking out for each other, reinforcing each other’s bad decisions.

While it’s not usually too preachy, there are very obvious feminist overtones. Although it takes some subtle, and perhaps unaware, stances on whether putting a gun to a cop’s head and locking him in the trunk is not as bad as a truck driver making suggestive gestures at women from his cab. It’s not as black or white as the characters make it seem. And while men might relate to the characters otherwise, these types of quasi-contradictions may keep some of them distanced still–aware that perhaps the filmmakers’ personal opinions might be getting in the way of the integrity of the story.

But the true key to appreciating Thelma & Louise is to not quite put its characters on a pedestal. Instead accepting that they, too, make horrible mistakes. Maybe the characters have black or white opinions, but the film wants the audience to question them. Coincidentally, that’s the conflict that often happens when you’re out on the open road learning about yourself and about life.

Towards the beginning, not long into their trip, the characters find themselves in a honky tonk bar in their home state of Arkansas. Thelma finds herself dancing closely to a man, who later attempts to rape her, which eventually leads to Louise killing him. Fearing that the cops won’t believe their story, their road trip turns into a run from the law.

With the seal of crime now broken, Thelma and Louise now find it easier to commit even more felonies. So badly that they cause it to escalate into something much bigger than they had originally anticipated, unearthing aggressions that they previously kept tame.

Opposed to other road films where the events that take place on the road feel outlaw-ish and unregulated, this one features a manhunt for the two women, led by Detective Hal Slocumb (Harvey Keitel).

At one point, Detective Slocumb states that eventually Thelma and Louise’s luck will run out. It’s funny to think that they’re lucky, when it’s a lack of luck that gets them here in the first place.

A road movie is far from an original concept, however Thelma & Louise manages to add just enough to it so that it stands on its own–putting it towards the top of the list. While candid and gritty as road films most often are, this story also has heart. Not in a sappy way, but in a way that lets you connect with these characters who find themselves down a rabbit hole.

Much of the emotion stems from Keitel’s character, who has empathy for these women and understands that it isn’t, in fact, black or white. While every cop in a 3-state radius is looking for them, Keitel is begging the girls to come in for questioning. Not like a normal movie cop would, but like he’s sincerely invested in their wellbeing. And he is. He grounds the film and shows that at least the screenwriter knows that not all men are bad.

Callie Khouri’s script is refreshing. The humor is so organic and the scenes never feel contrived.

And how the two leads manage the script is what makes the film take off. Both Sarandon and Davis are convincing. They feel real and you forget that they’re acting. Davis is transformed here, and her character continues to do so seamlessly over the course of the movie.

It was a time with real maps and no cell phones. For this and less obvious reasons, Thelma & Louise simply couldn’t be made these days with the same clamor or spirit.

My biggest gripe is that it doesn’t quite give us the ending we want. Instead, giving us one that doesn’t make as much sense, and that doesn’t properly justify some of the events leading up to it.

But Director Ridley Scott does an excellent job, otherwise, of making a film that will evoke any memory of an amazing road trip through the United States. Which is interesting, considering how the story is somewhat about misfortune. But it’s also a little about the personal growth that comes out of that misfortune. A bittersweet lesson that the road won’t ever let us forget.