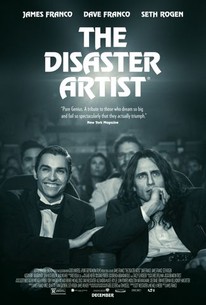 If you’ve ever seen The Room, you know it’s bad. Even after witnessing its atrocity it’s hard to believe what you just watched. Yet what makes it so much more unbelievable is knowing that there was actually somebody in this world who was capable of making something so terrible and so addictingly enjoyable at the same time.

The Disaster Artist is a love story, not only to The Room, but to its creator, Tommy Wisseau. It details the relationship between Wisseau and actor Greg Sestero. From how they met all the way to the premiere of The Room five years later.

James Franco plays Wisseau, giving us one of the best impersonations we’ve ever seen of anyone. Playing alongside him is his brother Dave Franco as Sestero. The two are so disguised in their roles that you never even think about the fact that they’re brothers.

Tommy is this guy who has stereotyped, in his head, the ideal celebrity as Milli Vanilli, essentially. He’s romanticized the idea of being a celebrity but hasn’t ever realistically conceived how he’s going to become one, because he thinks being a celebrity just means being cocky about how good you are. This conflicts with his genuine desire to be loved, even if it’s not for the right reasons. In the end, that’s exactly what happens. There’s this ego that is very obviously masking insecurity.

While it’s largely supposed to be an in-depth study of Wisseau himself, we already get that in a way, with his film The Room. But I think it’s Sestero who is slightly more compelling as his character develops so seamlessly over the course of the film–much to the credit of Dave Franco.

Greg, like Tommy, is obsessed with this romanticized idea of being an actor. He’s an aspiring actor and isn’t very good, but wants it anyway. When he faces career struggles, he perseveres due to his desire to see himself in the same likeness as his heroes, like James Dean.

If La La Land is about chasing the dream, The Disaster Artist is more focused on what you want out of that dream. For Greg it doesn’t matter how good the project is, he just wants to see himself in it–to be able to say he was in a movie just like the icons he looks up to. For Tommy it’s about being able to put his name on something, have people see his vision, and to be accepted by society.

The Disaster Artist does something excellent in that it makes us truly die of laughter while simultaneously never wavering from its vision of offering us a deep insight on the complex dynamic between two people and their individual issues. It’s probably some of the most fun you will have at the movies in recent years. Perhaps even more fun than the film that inspired it in the first place–however impossible that may seem. While The Room is never realized by its creators, The Disaster Artist is fully realized. And that dichotomy is what makes it even more brilliant.