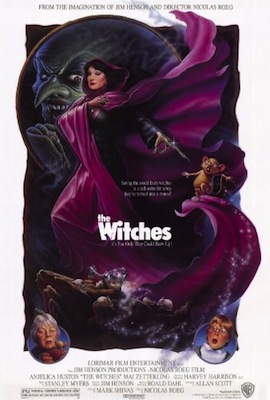 Roald Dahl has a history of hating motion picture adaptations of his books. But it just so happens that most other people like them. The Witches is no different. The film currently holds a 100% on Rotten Tomatoes, arbitrarily enough. And while a very good movie, I wouldn’t say it’s necessarily perfect.

The first half consists of very long scenes where a lot happens, but will lose children’s attention easily. However, the slow pace isn’t too detrimental, and makes for a very natural exposition. Even the long, drawn-out scenes are still riveting in this film.

In The Witches, Luke’s grandmother (Mai Zetterling) spends a lot of time telling Luke (Jasen Fisher) stories about witches. She teaches him how to identify a witch. You see, witches hate children and spend their entire lives kidnapping and disposing of them in one way or another.

Luke and his grandmother travel on vacation to a beachside resort in England, where, coincidentally, a witch’s convention is being held. Up until this point, we get a very simple and slow story, but we’re still invested as tension is building up for a rewarding finish.

Something specific happens midway through the movie that makes the story a lot more interesting. The pace picks up, culminating in a very entertaining 3rd act.

The Witches, even as a book, is not as much “fun” as a normal Roald Dahl story. Mostly because it’s a children’s horror story, rather than a fun and weird adventure like “Charlie and the Chocolate Factory” or “The BFG“. It’s more fact-driven, I suppose.

But the movie holds up pretty well, considering the initially calming nature. And I can’t stress enough how great the ending is.