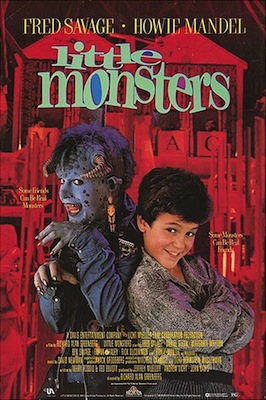 I probably first watched Little Monsters when I was about 7 or 8. The front cover and the premise made the movie look like a total blast. But watching it scared the heck out of me. Maybe more than anything else up to that point in my life. Most notably, Howie Mandel’s character, Maurice.

And Maurice is the good guy. But boy, did he creep me out. There are other, evil monsters who aren’t all that scary, but Maurice’s wide eyes and volatility made him much more terrifying (just Google a picture).

Little Monsters is about a boy, Brian (Fred Savage), who discovers a monster (Mandel) living under his bed. Upon trapping this monster, he discovers that there is an entire world of monsters who come to our world by crawling out from under bed spaces. Sounds kinda like Monsters, Inc., yeah? Except these monsters cause trouble that eventually gets blamed on the kids themselves.

Brian and Maurice become friends, filling in each other’s loneliness. Maurice takes him into his world and shows him how to be a monster. Essentially, they enter kids’ bedrooms and wreak havoc. Writing on walls, leaving perishables outside the refrigerator overnight, and just generally getting the children into trouble. They are crimes that actually go unpunished for Maurice and Brian, even though Brian subtly realizes that he doesn’t want to partake anymore. Nevertheless, it’s still not a great lesson for kids.

And that’s just one aspect that makes this movie not suitable for children. Besides a horrifying Howie Mandel, the film is incredibly dark. It makes Beetlejuice seem like Barney. The difference? Beetlejuice is about adults. Little Monsters is about kids. It’s easy to see the confusion. Just look at the movie poster.

Unsure who its audience is, Little Monsters blurs the line between family entertainment and grownup entertainment, becoming one of those notorious films that’s about kids even when it shouldn’t be watched by kids. And that’s why people may be off-put by it. But honestly, the movie is very entertaining once you can look past that.

Even when the the story doesn’t have much to do, other than show Brian and Maurice creating mischief, it’s still enjoyable. Mandel shows up about 30 minutes in, but the film is fun even before that. There are some other subplots going on that hold our attention well. And both Savage brothers (Ben Savage plays Brian’s little brother) show why they were able to successfully anchor their own respective TV shows for so many seasons.

LIttle Monsters has a lot of strengths. The first act plays as excellently as any kids movie you’ll see, and the last two are chock full of memorable horror sequences that still hold up to this day, making even Tim Burton and Robert Rodriguez gleam with artistic jealousy.

Little Monsters, at times, feels like two separate movies–tonally and story-wise. But I think that’s somewhat intentional. Putting all these scenes together without anything coming off as disjointed or stilted is impressive.

The script is written by Terry Rossio and Ted Elliot–the team who wrote Disney’s Aladdin, Shrek, and the Pirates of the Caribbean series. And interestingly enough, this is director Richard Greenberg’s only directing credit besides an obscure documentary and one episode of Tales From The Crypt.

My whole life I remember how I felt when I watched this movie as a kid. I didn’t necessarily remember what happened scene-by-scene. But now as an adult, watching it for the second time I can say that what happens in this film will likely be ingrained in my brain for many years. Although, I won’t be showing my son anytime soon.