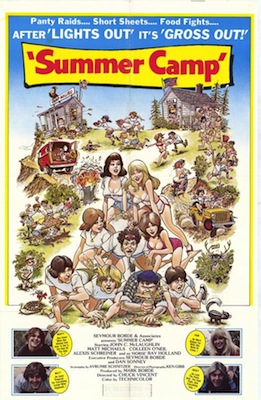 We’re able to take 1979’s Summer Camp at face value since it was released nearly a month before the Bill Murray classic, Meatballs, which popularized the summer camp sub-genre and inspired countless knockoffs throughout the years. So Summer Camp can’t fall prey to those comparisons. Not to say the film isn’t inferior, but just not for the same reasons.

Set at Camp Malibu, which is on the verge of going bankrupt, camp director Herman (John F. Goff) has the idea to invite past campers, now in their ’20s, for a free weekend at the camp as a sort of reunion in hopes they’ll have such a good time that their parents will help with future funding.

Herman tries to keep everything the same as when these 20-somethings were younger, but things get out of hand and eventually the “campers” engage in a number of sordid actives, as well as an all-out prank war.

The underlying premise is a mere McGuffin, as this movie is really about these adult campers romping around camp, never concerned with the camp going under. The stakes are never really there for us. We know about them, but never become invested in the camp’s fate, even in the slightest.

However, watching the antics unfold is entertaining. There are some unique situations and jokes, with a decent cast to help execute them fairly well. Half the characters look exactly the same, so we have no way to decipher who’s who at times, yet the more memorable characters have really interesting quirks that almost single-handedly drive the film. Highlighted is the meathead camper, Horse (Ray Holland), who does an adequate John Belushi ripoff and providing us with some of the movie’s best lines.

Like most camp movies, the series of events are really disjointed, with more of a rapid fire of situations and anecdotes. But editing-wise, this is worst than most. Despite being able to capture some really organic moments and great comedic timing, the cuts are criminally sloppy.

Where Summer Camp steers wrong is in never grounding itself in just one character. There is no singular lead or main protagonist. We get an adequate cast, sure, but having a character to attach the audience to is crucial for driving their investment in the film. On the big screen, camp is usually depicted as a raucous good time with memories you’ll never forget, but this movie seems to miss those aspects of camp that give it a special place in our hearts.

But to be honest, I’m not so sure director Chuck Vincent cares too much about those things. And the campers involved never seem to care about what’s at stake either. There is no spirit of camp or any built-up nostalgic journey these characters must go through to make them care. In fact, they all just snub their noses as the thought of helping save camp the few times it’s brought up.

Filmed in a rare, late use of full-screen aspect ratio, Summer Camp won’t stay with us much longer than needed, but still longer than a few of its contemporaries. We just wish it didn’t pretend to be something it’s not.