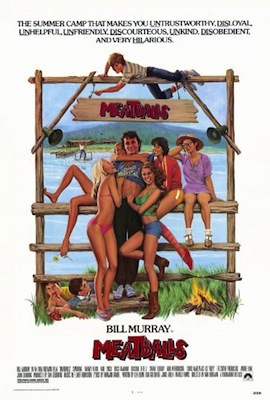 Early Bill Murray films didn’t see him grounded in reality often. Just look at Ghostbusters or Caddyshack. Yet somehow his first significant role, Tripper in Meatballs, saw him at his most down-to-earth for years. Maybe those later movies just wanted an amped up version of his Meatballs performance, honing in on his trademark unpredictability.

Tripper is the head counselor in charge of the Counsellors-in-Training (CITs) at Camp North Star, a budget summer camp for kids. Tripper is respected by everyone at camp. He’s also a prankster, with Camp Director Morty Melnick falling victim to most of his jokes.

Meatballs is shown mostly from the point of view of the CITs, but every once in awhile we see life from the campers’ perspectives.

The camper we focus on the most is new kid, Rudy, who tries to run away on his first day because he hates it and isn’t fitting in. Tripper empathizes with Rudy (Chris Makepeace) taking him under his wing, and the two become best friends.

Rudy is a very likable kid and Makepeace does a great job making him charismatic, as well as countering Murray’s behavior.

Across the lake is North Star’s rival, Camp Mohawk, a wealthy summer camp which is the bane of Tripper’s existence. Much of the film is spent on both camps competing with each other and Mohawk always winning.

Meatballs seems to be all-subplot, with the focus mostly being on showcasing life at summer camp and relying on Murray’s ad-lib. If he weren’t here, we probably wouldn’t be talking about this movie much today.

Sure, director Ivan Reitman and writer Harold Ramis are a talented team who go on to make movies like Stripes and the aforementioned Ghostbusters, even though they cut their teeth a year before with Animal House. But Animal House had John Belushi, just as Meatballs has Murray. Reitman and Ramis’ talents can’t go overlooked, but at the same time they weren’t as refined here as they ended up becoming with their future films, and may never have gotten those opportunities if it weren’t for their ballsy comedic leads early on.

Although Meatballs spans the entire summer, we don’t get taken on enough of a journey, or shown enough events to where we feel like a whole summer’s gone by. Most of the time is spent on relationships that lack conflict, so there’s not much of an arc. Even Tripper and Rudy’s friendship, though sweet, never has any friction–for better or worse.

Though misused once or twice, the drama which does ensue is never dwelled on. Meatballs mostly sticks with comedy, though it’s not quite the raunchy movie it poses to be. It’s not mean spirited. And there are some great moments where you can tell, at the end of the day, every character really does like each other.

What sets this film apart from the summer camp comedies that followed in its footsteps is how it values sentiment, not only aware of the nostalgia that camp and the awkwardness of childhood will undoubtedly evoke years ahead, but in the way it approaches fond memories in general. Camp North Star doesn’t have the money of Camp Mohawk, but the memories are just the same, if not more valuable. Especially at that age, winning and losing doesn’t matter as much as personal and moral victories. Plus who cares about luxurious amenities when you’re at summer camp?