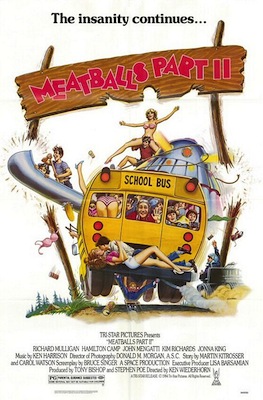 Meatballs Part II gets a bad rap, but I’m not really sure why. The film is a sequel in name only, which usually means “same plot, different actors”. But Meatballs II doesn’t just copy-and-paste what worked so well from the first film. Mostly because it knows it can’t. There’s no Bill Murray, who the first Meatballs relied so heavily on. Instead, the sequel scatters the talent amongst the whole cast rather than resting it on the shoulders of just one individual. And what’s most impressive is how well everything is executed. I suppose it’s easier to see a film at face value when you don’t have any affiliation with the original.

Taking place at a different camp entirely, Meatballs Part II follows Armand “Flash” Carducci (John Mengatti), a felon required to perform community service as a counselor at Camp Sasquatch. Flash is one of those guys who doesn’t like smiling. Or personal conversations. Or, you know, pleasantries of any kind. That is, until he beholds Cheryl (Kim Richards), a fellow counselor who he instantly falls for. Cheryl is very sheltered and a classic goody-goody, so naturally this makes Flash want to be a better man.

The only issue is we never see this transformation all the way through. A weak third act really drops the ball with any resolved character development and a well-earned climax, only to be concerned with bringing jokes full circle. This film has more of an emphasis on sex comedy, though it talks in euphemisms to inexplicably avoid an R (or even the brand-new-at-the-time PG-13) rating.

Meatballs Part II also switches gears by giving us more storyline with the actual campers. In this case, the kids find an extra-terrestrial creature who is sent to Earth by his parents in order to go to summer camp. The campers name him “Meathead” and the kids help him remain in disguise throughout the summer. For some reason I found their success in doing so entertainingly satisfying. Any movie that’s completely normal, and tries to be completely normal, despite a ridiculously uncalled-for alien Muppet is okay in my book.

The film doesn’t harp on the alien premise, nor does it exactly play in that sandbox quite as much as we would’ve liked to have seen. But for the most part, over-the-top zaniness seems to be avoided despite this bizarro plot point. Though I’m not sure I would’ve complained even if it had given in.

As far as comic relief, the highlights are a pre-Pee-Wee’s Big Adventure Paul Reubens and a pre-peak John Larroquette as ancillary characters. Neither men are going to replace Bill Murray in the same dynamic because of their roles here, but both actors are just as important to the quality of this movie. Albeit a movie with a very different tone than the first. One that utilizes more subtle humor over broad slapstick. Right away, Reubens and Larroquette help establish the foundation for the film’s wise comedic sensibilities and overall integrity.

I can’t emphasize enough how impressive Meatballs Part II is without Murray. Think about it, then entire first film was essentially the Bill Murray Show, dependent on him at every turn. But the Meatballs franchise trades in a goofball for a serious tough guy with this second installment, and makes it work. Don’t believe the negative press on this one and just go watch the movie for yourself.