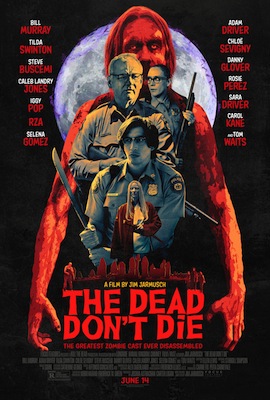 Movies featuring an ensemble cast can go one of two ways. In a positive scenario, each star is utilized perfectly within the story to create something truly satisfying. In a different scenario, however, the plethora of talent is haphazardly scattered across the film for no other reason than to have them be there. The Dead Don’t Die is the latter.

The people in the small rural town of Centerville are noticing strange things occurring all over, such as animals going missing, daylight not going away when expected, and cell phones not working. This is happening all over the planet. Earth has been knocked off its axis and things are going haywire. Little do people know, it’s going to get worse. Once nighttime finally hits, the dead will start coming back to life.

We struggle at first because the setup is slow, but then we realize the entire film is that way. Like if Wes Anderson and Paul Thomas Anderson had a movie baby, but with less character development.

While the film is star-studded, our main protagonists are Cliff (Bill Murray) and Ronnie (Adam Driver), two police officers who are trying to put an end to the zombies. Throughout their mission they encounter various other characters played by well-established actors or celebrities: Danny Glover, Steve Buscemi, Tom Waits, Tilda Swinton, Iggy Pop, Selena Gomez, Rosie Perez, etc.

Too much time is spent setting up all of these characters–many of whom ultimately serve no purpose. Selena Gomez, for example, is there for no other reason than to get murdered by zombies. Her presence isn’t fun or unexpected, and we’re not made to care at all about where she’s going.

Murray and Driver mostly carry on with a nonchalant attitude towards the very unusual events around them. An obvious metaphor for our society amidst the absurdity of today’s sociopolitical climate. But the ironic thing is, each side of the coin will view the happenings of the other side as absurd, so this movie is really making no clear point at all–merely emphasizing things we’re all already thinking.

Director Jim Jarmusch enters a new unique installment into the sub genre, posing an interesting take on zombies. They’re more lucid than they’ve ever been. And the human characters have an unusual attitude towards them (“Oh, look, there’s Grandma.”)

However, the tone is so flippant we tend to lose all investment in the plot and our characters. There’s self-aware satire, and then there’s this film–a complete allegory. When a movie deliberately veers from any and all connection to reality, it then becomes hard to connect ourselves to that allegory.

The movie does have a few things going for it. For one, the bizarre tone is consistent at least. I’m a fan of subtle humor, and there’s plenty of it here–even if many of the bits don’t really work over the long haul. It’s not so much the subtlety of the jokes, but rather the quality of them. Murray and Driver’s deadpan delivery is affable in theory, but there just isn’t enough there to make us want more.

The Dead Don’t Die isn’t a horror film at all, it’s a comedy. A disorganized, unrealized comedy. At it’s best, it’s pretty funny. Unfortunately that’s barely half the time.