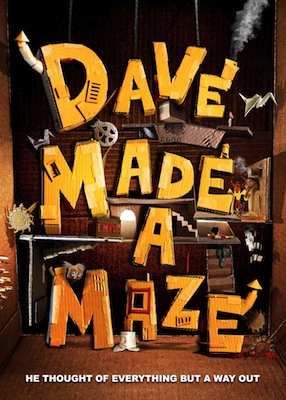 There’s probably no type of movie more satisfying to me than one with a concept so outside the box that it borders on ludicrous. Stuff like Dave Made a Maze, Brigsby Bear, Be Kind Rewind, or my all-time favorite, Bill & Ted’s Excellent Adventure. Ones with such a simple premise that we wonder how no one’s ever thought of it before. The obvious answer is because they sound ridiculous when you say them out loud. However, the minds who think of such concepts are usually the same who are creative enough to make these stories entertaining.

Dave Made A Maze is a prime example. It’s about a 30-year-old man whose girlfriend, Annie (Meera Rohit Kumbhani), comes home from a business trip to discover a cardboard box fort in her living room. Her boyfriend, Dave (Nick Thune), is nowhere to be found, yet she can hear his voice coming from inside the box. He says he’s lost, which confuses Annie, since the fort is only about 6 by 6 feet. Dave says that on the inside it’s much bigger. So Annie, mulling over this absurdity, recruits some of Dave’s friends to help her humor his claim. Upon entering the fort, they realize that Dave wasn’t joking around. The maze he built has taken on a life of its own, turning into a potentially deadly labyrinth with booby traps and monsters.

The movie initially feels like a short film or maybe a sketch on SNL–perhaps due to the low budget. But the deeper we get, we realize this is a fully realized story.

We learn that Dave is notorious for leaving every project in his life unfinished, much to Annie and his friends’ chagrin. But for once, he wants to finish something–this maze. Although this time, it’s the people in his life who are trying to convince him to just forget about the project because it’s just a cardboard box maze.

Dave sees the symbolism, even when his friends don’t. Finishing the maze will show him that it’s possible to finish anything, giving him confidence with other tasks. This project is meaningless on the surface, but it represents all of the things in his life that he’s let go by the wayside. As a 30-year-old dreamer, he sees his life slipping away unfulfilled and wants to have accomplished at least something.

I guess the main reason I love this movie is because I can relate–as most creative and idea-driven people will be able to. Not that all of us struggle with the dreaded unfinished project, but many of us feel our own opportunity to meet our potential slipping away as we reach our thirties. We have a lot going on upstairs and find it difficult to ground ourselves, leading to lack of overall focus as to what we ultimately want to do with our lives. It’s the labyrinth that is ADD and anxiety.

The script points out most of these themes, but it almost has to. Unless we understand the character, this would definitely go over people’s heads. Plus it helps those Annies of the world better empathize with their Daves.

The weakest parts of the film are the performances. Since the back-and-forth dialogue isn’t terribly strong or realistic, the acting has to be good enough not to expose it–which it fails to do. Fortunately the concept is so strong and story moves along so fluidly that this weakness is not detrimental at all.

Dave Made A Maze is one of the best looking low-budget movies I’ve ever seen. The cinematography is brilliant, and the set pieces are simply breathtaking (like a sort of Pee-Wee’s Playhouse, but much darker). And what’s amazing is how the two work together symbiotically to make something unbelievable. Even if this film isn’t your cup of tea, you’ll be a better person for watching it, and you’ll experience something you’ll likely never forget.