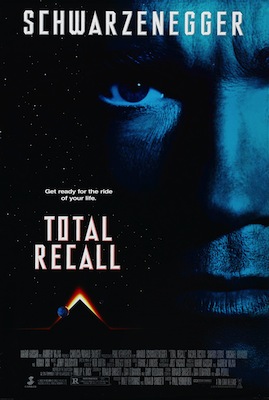 Released in 1990, Total Recall is still considered an ’80s film in my book (which you should read). It came out only three years prior to Jurassic Park, which is evidence of how far special effects advanced in that time period, although one could say that Total Recall may have been slightly more ambitious, depending on what aspect of the movie you’re taking about. Jurassic Park was ambitious in terms of creating entire creatures and making them look realistic. While Total Recall’s ambition lies in its striving to create an entire world–a la Star Wars–and attempting to make it just as expansive.

Total Recall stars Arnold Schwarzenegger as Douglas Quaid, a construction worker in the year 2084 who dreams of visiting Mars–which is now colonized. Luckily for him, there’s a service called Rekall, which implants memories in your brain so you can experience things without having to spend all the time and money doing so. But during his procedure, something goes wrong, and it turns out that Quaid’s actual life is the implanted memory, and the people who implanted it are after him and want him dead.

I love different filmmakers’ interpretations of the future in the ’80s and early ’90s. The technology was still trying to catch up to the ideas at play, but there’s something appealing and oddly nostalgic about “’80s future”. Verhoeven is still working out some of the kinks, such as the clunky delays on the video phone calls. But that just might be a testament to Verhoeven’s lack of direction in general. There aren’t a lot of positives to his directing. Showgirls seeps into this film a lot, especially in the cheesy dialogue. And somehow Schwarzenegger gives a worse performance than Elizabeth Berkley.

Plot holes and questionable character decisions riddle the entire film. Like when Quaid, who is to be “shot on site”, reveals himself to an army of guns aimed at him. Or an unexplained taxicab explosion merely for the sake of the bad guys being able to locate Quaid. Or car brakes conveniently giving out for no reason other than to further the conflict in the story. At one point the character literally states that if he doesn’t cross a mile-long bridge and turn on a reactor in time, it will be too late and everyone on the planet will die–then proceeds to saunter across said bridge. It feels amateur. And if it weren’t for the creative source material, Verhoeven would have been exposed here, years before Showgirls ever released.

Over the course of the film, we’re dealing with the concept of which reality is real and which reality is fake. It’s a fun mystery to experience. And Verhoeven and company truly make you second guess whether or not everything is real or fake, until it dawns on you that you’ve seen other characters’ perspectives. You realize this is a mistake because if there was a chance for this all to be fake, you would have only seen everything from the perspective of Quaid. It’s why point-of-view is so powerful. Verhoeven still tries to maintain this sense of ambiguity, but the truth is, he’s already compromised any chance for that. The ambiguity no longer makes sense and isn’t called for at all.

But he still keeps you guessing about something. Quaid knows a secret, which is why everyone wants him dead. Even though it turns out that secret isn’t all that juicy after all either.

Oddly enough though, there’s still a charm to Total Recall that makes the film entertaining and even endearing. Perhaps it’s that same quality that makes me love Showgirls so much. It’s head scratching the first time you watch it, but the mistakes become laughable after awhile and you might actually appreciate the world it’s built in.