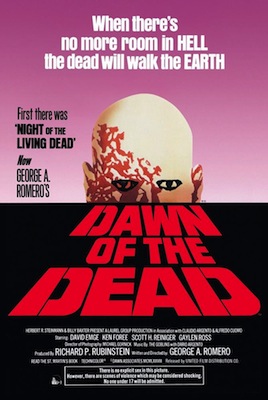 A sequel only because it takes place within the same universe, the film shows the world in a state of panic. People are told not to stay in their homes, no matter how safe. So they must be creative and find other ways of survival. Philadelphia TV news network employees, Stephen Andrews (David Emge) and Francine Parker (Gaylen Ross), who are also dating, have a secret plan to steal the station’s helicopter and escape. They inform their friend, Roger DiMarco (Scott Reiniger), a police SWAT officer, of their plan to pick him up as well. They could use the help since Stephen has a frustrating lack of street smarts and Francine isn’t far behind.

During a police raid, Roger makes friends with a member of another SWAT force, Peter Washington (Ken Foree). He joins the other three on their journey to safety.

The first bit of the film plays out as a sort of helicopter road trip. But the group eventually discovers a zombie-filled indoor shopping mall where they decide to seek shelter and gather supplies. After a sequence of cleverly tactical strategies to evade the creatures, the team eventually gets what they need. They eventually figure if they can find a way to get rid of the zombies as well as block any more from getting inside, they can have the whole mall to themselves for as long as they need it.

The shopping mall setting gives us a perfect representation of that late-’70s/early-’80s zeitgeist. Malls were relatively new, but quickly skyrocketing in popularity. In Dawn of the Dead we get to see several people exploring an abandoned mall and making it their own. This location is one of the things that allows this film to really soar and take on a unique life of its own. We are so captivated by this setting that we don’t want it to end. It becomes a character, itself.

Despite inspiring countless copycats, Dawn of the Dead still manages to stay clear of several genre cliches. Some even so subtle and so forgotten about over time that it’s likely the copycats didn’t even take note of them.

Romero stays consistent with his realistic depiction of what this hypothetical situation might be like. He doesn’t need to resort to cheap gimmicks to entertain his audience, because he knows the suspense will come naturally.

Even though there are some very questionable and unrealistic character decisions (some innocuous, others not so much), Romero handles the characters’ relationship building with perfection. He lets dynamics grow organically throughout the story, as any person’s relationship would if forced into a similar situation.

Dawn of the Dead is one of those rare movies you don’t want to end, no matter how long it goes for. The world created is so devastatingly grim, yet these characters have built a peaceful home for themselves. And I guess that’s Romero’s biggest accomplishment here: finding the beauty in the bleak, and finding hope amidst complete despair. Closed off to the world around them, these people try to survive the best they can and find their own paradise. We know it can’t last, but we totally enjoy watching every bit of it play out.