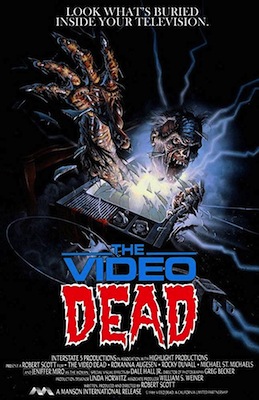 Who says zombies have to abide by a strict code? They’re fictional, after all. Just like time travel in media, zombies can follow different criteria depending on what the storyteller wants. The Video Dead is written by someone who has actual creative concepts and ideas regarding the walking dead. They’ve invented a set of rules that they obey and the parameters are pretty well thought out.

There’s a television set that gets mysteriously (and incorrectly) delivered to a famous writer’s house. But the only program he seems to get is this plotless black-and-white film where zombies walk around aimlessly. He turns off the TV, but it turns back on by itself. So he unplugs it, and guess what happens? Yup, it turns on again. We see an electricity effect and watch as several zombies climb out of the screen. Actually, most of the climbing is implied, assumedly due to budgetary constraints. This famous writer gets killed, but we don’t see it. In fact, we don’t see most of the killings in The Video Dead.

Several months later a new family moves into the house. The teenage children, Zoe (Roxanna Augesen), who’s majoring in aerobics and minoring in music videos, and Jeff (Rocky Duvall), who wears the same shirt for three days straight, arrive first as they await their parents, who are moving back to the United States after living abroad. One day, an older gentleman from Texas, Joshua Daniels (Sam David McClelland), arrives at their doorstep telling Jeff that he mailed a haunted television to the Institute for Paranormal Research, but it accidentally got delivered to their house instead. He warns Jeff of the insipid evils inside the set, claiming zombie creatures killed his wife. Jeff immediately dismisses the man as a crazy. Eventually he and his sister discover the TV and also the zombies, and request Mr. Daniels’ assistance after all.

What may seem like bizarre zombie logic to most people because they’re used to the George Romero world of the undead, is actually quite inventive and unique. The zombies in The Video Dead don’t eat people for nourishment. In fact, they hardly eat people at all. Instead, they kill because they’re angry that they can’t be human. As they kill their prey, they appropriate human culture. Put on glasses, wear wigs and dresses, eat real food. And these zombies can’t be killed in conventional ways, either. They can only self-destruct out of boredom if left alone for too long. Most importantly, the zombies are given a personality.

Unfortunately writer/director Robert Scott dilutes any intensity his film might have. He’s constantly panning away during killings, telegraphing the suspense, and playing down jump-scares.

As a writer, he has a difficult time locking in his characters’ personalities, relying on stereotypes, but then quickly abandoning those stereotypes if they don’t fit into what needs to happen on screen. But who am I kidding? It probably wouldn’t matter anyway.

It’s no surprise most of these actors (along with the director) have no other credits other than this film. The performances are complete garbage, but create an absolutely hilarious viewing experience when paired with the equally abysmal dialogue.

Buried beneath a low budget, sloppily edited, terribly acted, and poorly executed film is an intriguing concept. And part of what makes The Video Dead so enjoyably bad is that it does bring a semblance of creativity to the table at some level. Certain notions are so ludicrous that we simply have no choice but to accept them as canon within this film’s universe. And we can gladly bunch them together with all the bad stuff because somehow they perfectly fit together.