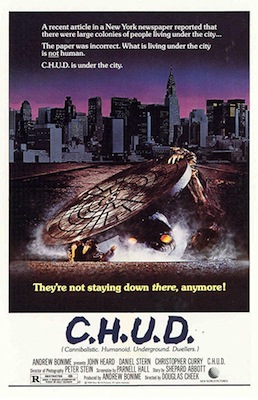 It’s bizarre that Douglas Cheek, the director of C.H.U.D., never went on to direct another feature film (though he has some 20 credits as an editor). And the two writers, Parnell Hall and Shepard Abbott, have never written another movie ever. I mean, C.H.U.D. is far from perfect, but it has a lot of character and there’s definitely a lot to like.

C.H.U.D. stands for Cannibalistic Humanoid Underground Dwellers, so the title tells us right away this movie is about its monsters. And fortunately, the filmmakers don’t dwell too much on the monsters themselves–rather, why they exist in the first place.

C.H.U.D. plays out as a mystery of sorts as our main characters try to figure out the cause of a drastic increase in the amount of missing persons in a small neighborhood in Manhattan. Police Captain Bosch (Christopher Curry) has a personal interest in these cases since his wife has also gone missing. He heads down to a local soup kitchen run by A.J. Shepherd (Daniel Stern), who has noticed that a dozen of his regulars–all underground homeless occupants–haven’t showed up in awhile. As the two men have mutual investment in what’s going on, they join forces to get down to the bottom of the issue.

Meanwhile, photographer Gary Cooper (John Heard) has recently worked on a project where he photographs this underground homeless population in New York City. He’s developed a rapport with these people, and one of them has sought him out for assistance after her brother was attacked by a monster.

The film does a good job not filling its fairly thin premise with meaningless plot or meandering. Instead, it fills itself with different characters and their stories. There are really three protagonists, and we see their stories all intersect at some point.

There’s Gary, who used to be a popular fashion photographer, but is realizing he doesn’t want to do photography for the fame and fortune anymore. Hence, his passion project on the homeless. Where Heard grounds the film with his realistic performance, Stern brings life to it with his off-kilter brand of subtle comedy as his character casually incorporates random lyrics from rock songs into everyday conversation.

While Curry gives a believable performance as Bosch, he doesn’t necessarily bring a whole lot of dynamic range to the role for a guy whose wife is missing and presumably dead. As he goes about his case, he never appears to have anything in the back of his mind. In fact, he seems more concerned with the homeless people much of the time.

C.H.U.D. isn’t without its flaws, but they’re fairly innocuous as we never expected much to begin with. Overall, the film is a really great horror-thriller. It knows how to get your blood pumping, ramping up perfectly to its climactic finish. The makeup and costumes are essential to creating the dark, smokey tone of the film as it immerses us into this underground world where the characters, and the audience with them, are left so vulnerable. A well-directed and surprisingly well-written film. It’s too bad we never got to see what else Cheek and company could do.