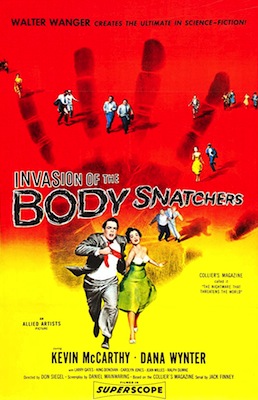 Don Siegel’s Invasion of the Body Snatchers is proof that you can create a chilling horror movie without resorting to cheap jump scares or vivid effects. All you need are characters and a story you’re invested in, punctuated by an incredible score.

Apparently the ’50s were a time where your town doctor doubled as a father figure and mentor for everybody. Dr. Miles Bennell (Kevin McCarthy), Santa Mira’s local physician, returns home from vacation to numerous town residents complaining to him that their close family members have been replaced by identical-looking impostors. Miles is initially skeptical, referring a couple of them to a shrink, but eventually many of his patients call him back to cancel their appointments, saying they don’t need to see him anymore. This makes him sit up.

His friends Jack (King Donovan) and Teddy (Carolyn Jones) call him over when they find an undeveloped body in their home, asleep, with Jack’s exact physical features–except this duplicate doesn’t have any fingerprints or facial lines. Miles begins investigating around town, including his girlfriend Becky’s (Dana Wynter) house, where he finds a body double version of her down in her basement. The once-doubter is now forced to face the truth and figure out what’s really happening.

The title of the movie pretty much tells you what’s going on, so there’s little else I need to say. The surprises really come within the third act, where we don’t know how this story’s going to end.

Prior to that, Miles and Becky are eventually the only two normal people left in town, as they remain in hiding from the rest of the “Pod People” who are trying to find them.

The film isn’t without certain holes. For one, all Miles and Becky have to do in order for the aliens to complete their body invasion is fall asleep, which begs the question of why the Pod People don’t want them to get away, even aggressively hunting them down. In a few hours, their transformation will be finished anyway, so why go through all that trouble? This detail is fairly distracting, and somewhat risks compromising the thrills built out of the conflict.

Yet somehow Siegel manages to still give us chills while conveying exactly what he intends to. He has help from screenwriter Daniel Mainwaring, who gives us a truly compelling story, even though he fills it with dialogue which lacks a certain natural quality we’re so used to today, preventing much of the back-and-forth from holding up well. The script is overwrought with verbose voiceover by Miles that constantly repeats itself and provides us with too much exposition. Though, this is likely the studio’s fault, as they insisted on adding a prologue and epilogue to the film, despite the director’s protest.

Perhaps Siegel knew his own strengths all too well. He knows how to tell a story and develop characters just fine on his own. He perfectly builds our interest in Miles, as we see his transformation from overconfident skeptical expert to full-fledged conspiracy theorist in less than 80 minutes. Credit to McCarthy, who gives such a committed and focused performance as his character seamlessly falls into a downward spiral with no apparent way out.

The strengths of Invasion of the Body Snatchers truly lie in Siegel’s direction. He’s constantly pushing the plot forward even when there’s not a lot happening. Accepting assistance from those around him, he builds up the film’s tension so perfectly, turning a potential B-movie into a marquee classic.