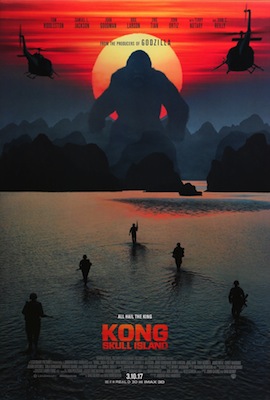 There are so many throwaway action films these days that I honestly wasn’t expecting much with this new Kong: Skull Island. But then I found out it stars Brie Larson, and my interest was immediately piqued. Whether you like her movies or not, they’re never throwaways.

And her streak continues here. Kong is the good type of action movie. The kind that can join the likes of the new Mad Max, or the Planet of the Apes films. The special effects are never in vain. Each detail is deliberate. Which, of course, makes the whole occasion feel more realistic.

The film takes place in 1973, just after the US pulls out of Vietnam. Satellite images pick up a mysterious “Skull Island”, which is one of the last discovered places on Earth. So obviously, the US government wants to get there before anybody else. They recruit a team of military personnel, scientists, a human tracker (Tom Hiddleston) and a photographer (Larson) to seek and find anything and everything they can. We already know part of what they’ll find, due to a 3 minute intro scene, showing King Kong, himself. The rest, however, we slowly figure out for ourselves over the course of the film.

Eventually, the gang discovers John C. Reilly’s character, Marlow, who has been on the island since 1944, when his World War II fighter plane crash-landed. Marlow is not quite clueless, but definitely a little nuts. He’s been there so long that he’s never sure whether he’s thinking something or saying it out loud. But his expertise makes him the right man to guide the team on their journey, teaching them all about the island.

It’s funny though. We see his fish-out-of-water scenario unfold as his bold curiosity has him asking all kinds of questions about what America is like in 1973, becoming floored when he hears David Bowie music or learning that the Cubs haven’t won another World Series. For him it’s only been 29 years. Imagine if he was from the late ’80s suddenly learning about 2017. The differences for him don’t seem quite as dramatic with that perspective. But surely they still are.

Reilly is truly magnificent. He adds warmth and unforced levity to an already-fun adventure. One can only hope they make a prequel film about his story.

Nothing takes me out of the realism of a film like heroes quipping around during moments when their lives are genuinely at stake. Here, that doesn’t really occur. Sure, before Reilly shows up halfway through, the jokes mostly fall flat. But nevertheless, when a character is nervous, we truly feel it.

Other than Marlow, there’s just enough depth to make us invested in the other characters for a potential sequel–if they’re included. But honestly, we’re given what’s important to the movie, instead of being force-fed a bunch of background stories to try and make us invested. Impressively enough, we’re invested anyway.

Kong: Skull Island is one of the better action-adventure movies of recent years. It hearkens back to genre films of the ’90s and before, such as Jurassic Park or Predator, placing itself at the same level as some, and above even more.