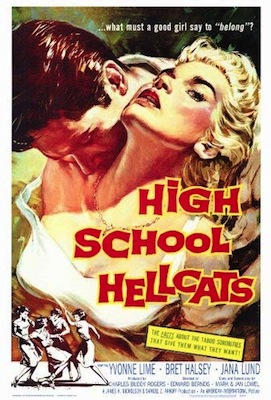 It’s interesting what was considered provocative in 1958. The Hays Code, which simply gave a seal of moral approval for films, was still in effect, though guidelines had been loosened by this point due to competition from foreign markets as well as television. Ten years from the dawn of the MPAA’s rating system, films were starting to push the limits more and more. Though based on this “exploitation” film, you wouldn’t know the difference.

The poster for High School Hellcats would have you thinking that this type of promiscuity would hold up compared to today’s movies. But actually, this is just a common misrepresentation of a film to get butts in seats. The image depicts nothing from the film, since there is little-to-no sensuality.

At a mere 69 minutes, American International Pictures released High School Hellcats as a double feature alongside Hot Rod Gang. The movie follows supposed good-girl Joyce Martin (Yvonne Fedderson) who just recently transferred to a new high school. Her first class is home economics, where she meets Connie Harris (Janet Lund), the de facto ruler of the school. Connie heads an all-girl gang called the Hellcats who does things such as talk back to teachers, drink alcohol, and break into empty houses to throw parties. Connie sees Joyce as a potential new recruit, so she gives her a couple of initiation tests. She tells Joyce to wear slacks to school the next day, which is against the rules. Joyce is polite, so she doesn’t rat out Connie for anything, which Connie admires.

Joyce’s home life is the root of her issues, but we don’t see enough of that ahead of time. Her parents don’t pay enough attention to her, yet they’re always ordering her around–at least her uptight father is.

I suppose her parent’s lack of attentiveness is supposed to be somewhat shocking in 1958. At least compared to the Cleaver-like dynamics we saw everywhere else. But I think the real world was transitioning away from those utopian ideals to some degree back then. And in today’s world it’s a common sight to see parents with their noses constantly in their phones. Or at least putting their children’s noses into phones so they don’t feel as guilty for doing so as well.

Joyce is a pushover, yet stubborn when it’s convenient for the plot. She’s a strong woman with her parents and men in general, but a pushover with Connie and the Hellcats, doing whatever they tell her to do. She joins the Hellcats because she’s sick of taking orders at home, but doesn’t mind taking even more ludicrous orders from Connie.

Along the way, Joyce develops a romance with Mike Landers (Brett Halsey), for a dynamic that was ahead of its time in a lot of ways. Mike lets Joyce be independent while still challenging her to better herself. She struggles to understand how it’s possible for someone to push her without trying to control her. This relationship plays perfectly into the story without subjecting us to a gratuitous or sappy love story.

The story changes keys about halfway through after someone gets killed during one of the Hellcats’ outings. An officer begins investigating the series of events and we get a quasi-crime story. The filmmakers do a good job at not stereotyping the detective during an era where that’s all they were.

The plot is rushed early on, but other times this lack of extraneous details tightens up the script and helps move the story along swiftly.

A lot gets accomplished in such a short runtime. For a B-movie that was intended to be somewhat cheap entertainment, High School Hellcats, though laughably serious at times, holds up surprisingly well when it counts, and gives us an extremely entertaining final act.