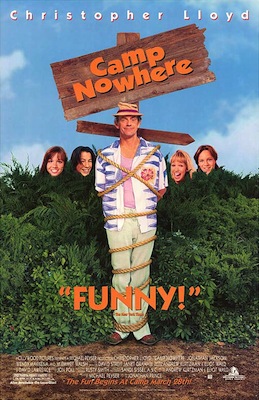 I remember as a kid seeing the VHS cover for Camp Nowhere on the shelf every time we would browse movies at Blockbuster Video. The image always looked appealing. Christopher Lloyd tied up by a bunch of kids at a summer camp. I was a summer camp kid, myself, but I knew my parents wouldn’t let me rent this movie. As much as I wish I had grown up watching Camp Nowhere, it’s probably good on my parents that I didn’t. Despite its PG rating, the scenarios these kids are put in are much more PG-13.

It’s such a ’90s thing to have a movie about kids containing adult themes and attitudes. Only usually those themes are depicted in a way that goes over our heads as kids. But in Camp Nowhere, the young audience is very aware they’re watching something not shown in very many “family” movies.

This is probably one of the only times where 14-year-olds are actually played by 14-year-olds, rather than twenty-somethings. Perhaps this was done to make the movie feel more realistic and to appealing to kids, but upon watching Camp Nowhere, their target audience is a bit unclear. If the filmmakers had cast older-looking actors I suppose the events would’ve been more effective and believable, and thus given an older audience.

Camp Nowhere follows Morris “Mud” Himmel (Jonathan Jackson), a high schooler whose parents are forcing him to attend a computer camp for the summer. They believe Mud has unlimited potential and that computers are the future (they’re not wrong). But Mud has problems speaking up for himself with his parents, as well as kids at school. However, he happens to be really good friends with the school bully Zack (Andrew Keegan), though they both keep this under wraps for the sake of Zack’s mean reputation.

One day while walking home from school with Zack and two girls, Trish (Marnette Patterson) and Gaby (Melody Kay), who all are being forced to attend some lame summer camp of one kind or another, Mud has the brilliant idea to create his own camp with no parents, counselors, or rules. With the help of ex-drama teacher and local nut bag Dennis Van Welker (Christopher Lloyd), the kids concoct a plan to con their parents into sending them each to the camp they had initially chosen for them. But really they’re all being sent to the same place–a former hippie commune which the kids rent for the summer with the money their parents fork over for the camps they think they’re attending. When the rest of Mud’s classmates hear about this, they want in. The result is a hippie commune overrun by dozens of rowdy 14-year-olds.

At this point in the film, after an awesomely promising setup, you wonder how this story can possibly deliver once the kids actually get to the “camp”. In most camp movies, the conflict arises when the campers meet some sort of pushback with the counselors or camp directors. But summer camp conventions have been tossed aside for the sake of the premise of this film. If there is no authority figure, conflict has to come from somewhere else. Yet somehow Camp Nowhere pulls this off convincingly. The potentially empty plot turns into something worth watching and enjoying due to the kids’ hijinks and Christopher Lloyd, himself, who grounds this movie amidst a group of unruly children, without feeling the need to intervene and teach them to behave. He teaches them lessons in other ways.

And by “them”, I mean Mud. Camp Nowhere’s biggest issue is that it develops characters rather than relationships, for the most part. Though Mud grows as a person over the course of the summer, the initial foundation of the movie’s setup is in Mud’s dynamic with the individuals in his life. And while dynamics do evolve between him and some of the other kids, these feel like more of a result of the development of the character rather than of the relationships themselves. Things change because Mud changes, but he changes separately from his friends, inserting what he’s learned where he sees fit. Summer camp is about personal growth, but also just as much bout how you build friendships and grow with others.

For a movie that pushes the envelope so much, you would think it would’ve taken more chances with the premise. Instead, the envelope is pushed just far enough so that parents won’t let their kids watch it, but not enough so that older kids will be attracted to it.

The film also misses an opportunity to have the kids realize that there are some disadvantages to being on their own with no rules. I’m not talking about repercussions. I mean actual introspect as to what it means to be on your own, even coming to appreciate structure to some degree. Perhaps that would undermine the whole “kids rule” spirit of the movie (and the ’90s), but I do feel like that spirit could still exist–even win in the end–while still having some sort of internal conflict for its characters at one point or another. This is intended to be a family film after all, right?

Despite its sloppy directing and often porous script, this movie strays away from the juvenility that riddles a lot of kids movies from that same time. Similar to Home Alone, Camp Nowhere presents unrealistic scenarios in a realistic way, but also taps into that pie-in-the-sky outlook on life that we had as kids. Kids who could watch a movie like this and, for 90 minutes, dream about how great this situation might be. And watching Camp Nowhere as an adult who misses his ’90s childhood makes me wistful about having that very same mindset at that point in my life. It’s a nice place to escape to. Maybe that internal conflict is better left unstated after all.