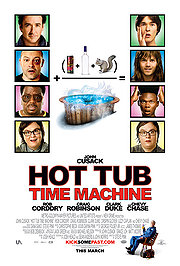 Upon watching this movie for the second time in preparation for the sequel, I’ve realized how funny it really is. Although much of the humor is subtle, the situations are priceless. For a film that seems fairly shallow and silly, it digs pretty deep and even gives off a grandiose vibe. The cast plays well together and feed off each other well. Those who are nostalgic about the ’80s will also appreciate this film as it gives plenty of nods to the decade.

While the jokes are sharply written and aren’t simply dependent on one-liners, the dialogue could be a little less vulgar. Not that it bothers me a whole lot, but it feels as if a 16-year old boy wrote much of the characters’ responses to one another. When cursing isn’t used to enhance the dialogue it becomes distracting and a seemingly cheap way to get laughs from teens.

Other than that, I can’t complain too much about Hot Tub Time Machine because it never tries to be anything that it isn’t, and it’s a very unique addition to the comedy genre.