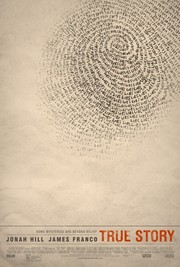 Jonah Hill plays Michael Finkel–a journalist who has just been fired from the New York Times due to a flub in one of his stories. Meanwhile Christian Longo, played by James Franco, is accused of murdering his wife and kids. And although the two haven’t met, Longo tells the police that he is Michael Finkel of the New York Times. Finkel hears of this and writes to Longo to request that the two meet. For the span of the movie, we–along with Finkel–are trying to figure out if Longo is guilty or innocent.

At the core of every film based on a true story is the reason for making it. Some want to tell the life events of a notable person. Others want to tell of a unique and interesting real-life scenario. But the story of True Story really isn’t that unique. The most interesting part is the identity-claiming of Longo, but that is forgotten about one-third of the way through the film.

At the heart of True Story are filmmakers who wish to paint a picture of Finkel and Longo’s relationship. It keeps us in the dark to maintain its mystery, but there is definitely second agenda.

One thing that doesn’t really work is that the writers try too hard not to stray from Finkel’s book, which the film is based on. Finkel doesn’t find out how the murders happen by the time he finishes his book, so neither do we. We keep feeling like we are kept in the dark and soon realize that the film is stretching very few events into a full-length feature. At times, the filmmakers try so hard to be true to the source that they forget the film’s purpose.

And possibly the biggest issue is the acting. You have three Academy Award nominees and none of them bring any character to the film. Two of the three (Hill and Felicity Jones who plays Finkel’s wife) might give their worst career performances. Franco does a decent job as Longo, but is caught acting a lot. And every time Franco and Hill interact it feels like one of them is about to break character and crack a joke.

What works is the relationship between the two leads. It makes for good character study and provides a nice subplot to the murder mystery.

Regardless of everything bad you have to say about this film, it was creepy enough and mysterious enough to make me to like it. The entertainment value is high. It’s just that the necessity of the film is low.