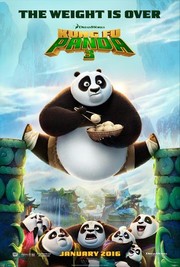 Everything happens so fast in this new Kung Fu Panda installment, just like it did for the previous two. Though hardly necessary, the people seem to respond well to continuing this franchise, so here it is.

When kung fu warrior, Po (Jack Black), meets his long lost father, he gets invited to follow him to the secret land of pandas. Meanwhile, the evil spirit warrior, Kai (J.K. Simmons), is trying to defeat every kung fu master, stealing their powers.

While none of this is connected to the first two movies, the tone definitely is. We’re still given that animated slapstick comedy that these films excel at so well. But there’s way too much happening at once, and the jokes are always amidst the action, hardly ever giving us a chance to breathe.

Overstimulation aside, the aesthetics are really what carry us through to the end. Without them, this movie would feel very void of any character at all. Every bit of scenery is beautiful and you wish there was a secret panda land that you, too, could visit.

Getting through the by-the-numbers first act is probably the biggest challenge here. Scenes seem added only for the purpose of entertainment without actually enhancing the script. And a dozen new characters get introduced, raising the head count, but dropping any depth that gives us a reason to be invested.

For a family movie, it’s very heavy on the details. But Po is stupid enough that he has to ask questions so that we, the audience, can understand things–you know, just in case we don’t.

Kung Fu Panda is cheesy and silly, but still entertaining. It’s also a movie for kids, and based on the box office results, I’d say they hit their mark.