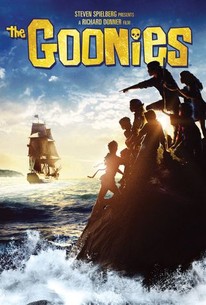 Unlike most people my age, I didn’t grow up with The Goonies. I would’ve loved this movie as a kid, but wasn’t allowed to watch it. Not surprising since there’s a lot of mature sexual humor and some surprisingly graphic imagery considering its target audience. Which is unfortunate, because much of these things are unnecessary to the enjoyment of the film. Other than that, it’s one of the best ’80s kids movies I’ve seen–albeit that sample size is somewhat diminutive compared to the next decade. And as enjoyable as the movie is, its biggest issue is that it’s completely unsure of who its target audience is in the first place.

A group of adolescents growing up in a seaport town are facing a threat to their friendship as a property development company is forcing them out of their homes in order to build a country club.

The leader of these oddball kids is Mikey (Sean Astin), who discovers an old treasure map and is convinced that if they find this treasure they can save their homes. Unfortunately, a group of escaped convicts are on their trail, racing them to the treasure.

Since the movie does contain some intense and graphic scenes, the filmmakers might as well have made these villains actually scary, instead of bumbling Home Alone-type idiots. Nothing about them is terribly threatening.

Some parts get a little too wacky and juvenile, while simultaneously having other scenes that are almost too intense and mature for younger viewers.

As an adult, it’s the latter that makes this movie so good, but it’s the former that will alienate us a little. In Home Alone, the villains Harry and Marv are silly, but it fits the childlike and fun nature of the movie. However, The Goonies is much more intense overall, so we need the villains to match that.

Astin does a great job with the lead role, and his costars know how to stand out too, but director Richard Donner gives them a little too much freedom at times, and the result is chaotic.

The only reason why I gripe here is because, otherwise, it was very enjoyable.

The adventure aspect of this film is very well thought out. It’s so much fun as Mikey and his friends trek through this underground Indiana Jones-esque tunnel trying to find the treasure. Scene after scene is filled with well-crafted detail, never making us feel like it’s merely filler.

The bad part about such a fluid story like this is that the climax can potentially drag. And here, it meanders while trying to find the perfect result.

Steven Spielberg is credited as producer and with coming up with the story on this film, but it would have been so much better if he had actually directed it himself. Then these sloppy little mistakes and oversights here and there wouldn’t have been so prominent.

The Goonies is actually a good movie, and I should probably be emphasizing that more. It probably would’ve been one of my favorites as a child. But as an adult with no real nostalgic ties to it, it’s easy to see how much better it could have been.