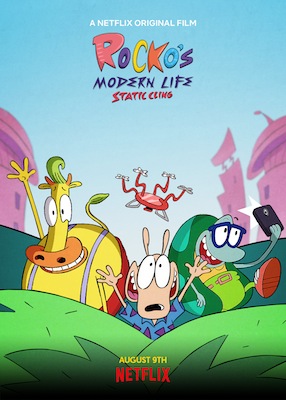 As a child of the ’90s, old school Nickelodeon is my most ardent pop culture affiliation. So when I heard there was going to be a NEW Rocko’s Modern Life special two decades after the classic cartoon last had a new episode, I was beyond thrilled. The series was, and still is, one of my favorites. As a kid, this was also my dad’s favorite of the shows I watched, and memories of it evoke wistful nostalgia to say the least. Though I love where my life’s at now, I do yearn for a bit of the simpler times to be sprinkled in today. Nostalgia is a powerful ting. But perhaps it’s not the memories we attach ourselves to, but how we interpret those memories. And what they stand for.

Rocko’s Modern Life: Static Cling takes place 20 years after the end of the original series, and Rocko is inside his house, which was launched into space all those years ago. Along with him are his best friends, Heffer and Filburt, and his dog, Spunky. They’re living a relatively complacent life, but begin growing restless after their one VHS tape of The Fatheads gets ruined and they have nothing left to watch. Eventually realizing the button to send them back to Earth has been stuck to the back of Heffer’s pants this whole time, the group returns back to their home, O-Town.

But this isn’t the O-Town of 1996. A lot has changed. There are smart phones, drones, the internet, and suddenly the world of pop culture isn’t so simple anymore. Most notably to Rocko, The Fatheads is no longer on TV, which sends him into a state of panic. One thing hasn’t changed–everything in town is still run by the mega-monopoly, Conglom-O. But Conglom-O executive, Ed Bighead, who’s also Rocko’s neighbor and pseudo-nemesis, makes a clerical error caused by Rocko’s atmospheric re-entry. This causes the company to go bankrupt, and with it, the economy of O-Town. Rocko has the idea that bringing back The Fatheads will give Conglom-O and the economy the boost they need. Problem is, the show’s creator is Ralph Bighead, Ed’s son, who left years ago to find himself and no one knows his whereabouts. So Rocko, Heffer, and Filburt set out to find him.

As a film that relies heavily on nostalgic fans for its viewership, Static Cling is very critical of nostalgia. At first we’re basically told that we have no other choice to believe that maybe the answer to all the world’s problems is in nostalgia and looking within the simplicity of our past. But later the message seems to be that if we embrace nostalgia then that means we’re resistant to “positive” change. We’ve always had the conflicting interests of nostalgia and change, but Static Cling doesn’t help us make any sense of that. If anything, it makes things worse.

Hearkening back to the Rocko of old, series creator, Joe Murray, uses traditional animation techniques rather than digital ones, helping keep the film very much in the same spirit of the original show. Along with the humor, the characters all feel like they were directly lifted from 1996 and seamlessly inserted in 2019, albeit in an acquiescent widescreen presentation. The plot never has any lulls, but also never stops to take a breath either, often times giving us a sort of hyper anxiety. However, the film is at its best when presenting anecdotal moments that have little to do with the plot or its message. Beyond that, standout characters Heffer and Filburt are left with nothing much to do. Once the sociopolitical commentary is brought into the picture the jokes don’t come as naturally and neither does the character development. That’s one of the casualties of having an agenda. And in this case, a disorganized one.

The main message of the film has to do with change, and whether change is really all that bad. It starts off showing change in a negative light, depicting the addiction and self-consuming attitudes bred from technology as a sad reality. Then Murray does a 180, trying to convince us change is usually good, but never says how we can tell the difference. Now we’re confronted with the issue of not knowing the filmmaker’s opinion. Statements are made, but never backed up with reasons. A gray area isn’t bad, but when we just have it handed to us with no explanation, that gray area is meaningless. All we can interpret is that change is only okay if it’s convenient and favorable to you. How are addiction and self-consuming attitudes not favorable to you on the surface?

At one point Rocko says, “Oh Spunky, at least you always stay the same,” meanwhile accepting even bigger changes elsewhere. Our protagonist seems to be okay with and encourage change long before his character comes to accept it, a non-existent internal crisis that causes his change of mind to feel unearned. Even if you’re part of the choir, the way characters come to accept change isn’t clear or justified enough, because in order to do so, the film would have to get deep. But this is Rocko and that’s just not going to happen. Which leaves us to wonder if this show is even the right place to host this agenda. Static Cling has the boldness to be thought-provoking and “progressive”, but no clue how to be emotional. And it needs both to get its point across. As of right now, we have an incomplete argument.

I like Static Cling much better when it tries to say things about art and the purity of creation. How true creativity is not born out of money, but of the necessity of creation itself. Those are honorable themes. Mostly because they’re seen all the way through here. The meta show-within-a-show is not only included to justify the existence of this “reboot”, but also to justify what the film is trying to say. Even if we’re still not quite sure what that is.