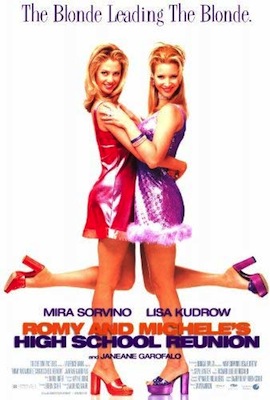 It’s interesting to remember a time when we could all actually surprise people at a reunion with how we’ve changed in the last ten years. Nowadays, with social media and websites literally made to network with our former classmates about what we’re doing with our lives, theres no sense of mystery anymore.

Romy and Michele’s High School Reunion follows two best friends living together in Los Angeles. Romy (Mira Sorvino) is a cashier at a car dealership, while Michele (Lisa Kudrow) is unemployed and not looking for work. They play into the stereotypical “dumb blonde” stereotypes.

Both women moved to LA from Tuscon in order to live “the dream”. But actually, all they’ve done is romanticize that sentiment and think that merely living in LA is living the dream. They lack ambition and are totally complacent with their lives.

But motivation may strike up as they catch wind of their ten-year high school reunion back in Tuscon. Michele wants to go, not even remotely concerned that she’s done nothing with her life since graduation. She convinces Romy, who suddenly realizes that she’s done nothing with her life. Michele doesn’t really care at first, but Romy gets to her. So they decide to concoct a story about how they invented Post-It notes.

The girls are very similar to each other, but over the course of the film we see how they’re actually quite different. Michele buys into the “ignorance is bliss” mindset, which perfectly balances out Romy’s over-awareness of what everybody thinks of her.

Early on, the story spends some time setting up their high school life through flashbacks as they look through their yearbooks and tell stories. We get a great feel for the characters we eventually meet later on, as well as the dynamics between everyone.

The film possesses somewhat of a unique narrative. There’s a fantasy dream sequence where Michele imagines a best-case scenario of what happens at the reunion. It goes on for awhile before we start to catch on. Initially I thought this to be a narrative crutch and a time-filler, but after watching the rest of the movie play out, I realized that its purpose was to further emphasize the events that actually end up happening at their actual reunion in real life.

Romy and Michele’s High School Reunion is smartly written and covers its back well at all times. The film, written by Robin Schiff and directed by David Mirkin, is a product of a vision seemingly unmuddled by studio bigwigs trying to organize it into something more mainstream. And the result is fantastic, giving us a relatable premise, a satisfying conclusion, and subtle humor that only gets better with age.